You are here: Home / National News / A Hundred Homes destroyed by Washington Wildfire 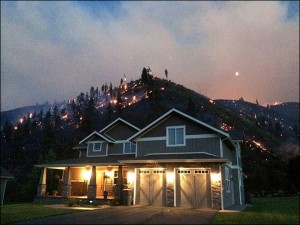 On Saturday, a wildfire has raged in Washington state’s Cascade Mountains, destroying 100 homes and causing the evacuation of countless families. Sadly, in spite of the cooler weather coming our way, emergency officials stated that relief is not expected.

120 miles away from Seattle, to the northeast, lies the town of Pateros, where the Carlton Complex fire has caused immense damage and destroyed approximately 100 homes in and around the city. As a result of the dangerous situation, Emergency Management Division officials have issued mandatory evacuation orders and 650 people had to leave their homes behind while fleeing to safety. On Friday, however, some decided to return to their homes to inspect the aftermath of the fire and see what exactly had remained of their homes and their belongings.

There are 625 firefighters who are currently bravely fighting the blaze that has been whipping through the area. Mark Clemens (spokesman for the Washington Emergency Management Division) has informed the public that weather conditions will not be helping these firefighters until Sunday as neither temperature drops nor humidity levels increases are expected by then.

The fires broke out on Monday when lightning strikes triggered the first flames within the Carlton Complex. Since then, they burned through over 100,000 acres of vegetation and destroyed around 100 homes. It is also not the first fire to mark the annual fire season within the Western states. Around two dozen more are burning between southern California and Idaho, drought-parched states where the fire season constantly brings such destruction.

Out of these many fires, the biggest one is burning in the Buzzard Complex. Also sparked by lightning, it has destroyed over 360,000 acres of rangeland in Oregon. What is alarming is that it is also a fifth contained (according to Rita Dyer, fire spokeswoman).

The fire in Washington has been pushed by erratic winds in new direction and is rapidly growing. On Friday, it had been measured at around 260 square miles. While minor burns have been reported, there are no serious injuries to date. Airplanes and helicopters have been continuously throwing fire as well as fire retardant on the fire from all parts.

Sheriff Frank Rogers (Okanogan County) stated that the fires will eventually run out of places to burn and that they will, eventually, come to an end. In the meanwhile, there are dozens of Department of Natural Resources helicopters as well as the spotter plane from the Washington State Patrol trying to control the fires as best they can.