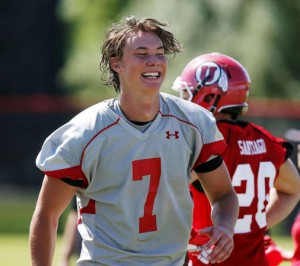 The Salt Lake City Tribune reported last week that the Utah junior quarterback Travis Wilson was set to be cited for drinking while below the legal age. The underage drinking citation was sent to the 20 year-old athlete after an incident that took place Friday evening in Salt Lake City. Wilson was found by the police authorities supervising a Tim McGraw concert in Salt Lake City to be in possession of alcoholic beverages. He was also revealed to have consumed alcohol and, as a follow-up, was cited to the West Valley Justice Court. However, the authorities proceeded by releasing the athlete “at the scene” of the event.

The statement has been officially acknowledged by the team, via an official statement from the head coach of the Utes. Kyle Whittingham told the press that the team is “still in the process of gathering information on the incident. Once we have all the facts, we will handle the situation internally and determine any disciplinary action that should be taken”.

This is but one in a series of less than happy events involving junior QB Travis Wilson. During a match that Utah’s junior team played against Arizona State the previous season, Wilson suffered a serious concussion, which all but put a stop to his promising career. The medical examinations which he received following the injury revealed an inter-cranial condition affecting his arteries. Up until that point, Wilson’s stats for the season had been impressive: 1,827 yards in throws, no fewer than 16 touchdowns and an equal number of interceptions.

Many surmised at the time that his career had ended with that concussion; however, he recently received medical clearance to continue playing the field for Utah. Yet he was allowed to take part in a set of drills that took place in February – most likely because they did not involve any contact. This June, the doctors further examined him and concluded that he can resume his track record with the Utes, who are on the up and up in the rankings.

In spite of his spectacular comeback, as of this writing his standing in the Utes’ line up for the coming season remains unclear. Not only has this underage drinking citation thrown some shade on his previous performances, but the Utes have also recently added Kendal Thompson, who was transferred to Utah from Oklahoma. Throughout the previous two seasons, Wilson began in starting position, but it remains to be seen whether or not this will also be the case in 2014. The Utes start this year’s season with a home match against Idaho State, scheduled for August 28.