You are here: Home / Sports / Third Pull Out from USA Basketball Team 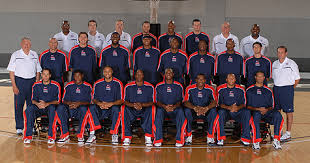 Another basketball player withdraws from consideration for the United States Basketball team scheduled to play during the World Cup which is taking place next month. Kevin Love of the Minnesota Timberwolves has become the third player to pull out from the running.

Love is a three time NBA All-Star with a 26.1 point average, 6-10, 12.5 rebounds and 4.4 assists during the last season. As he was one of the players being considered for the USA National team, he informed the committee that he is unavailable to play this summer because of his current status.

Jerry Colangelo, USA Basketball chief explained that he not only wants to get the job done but that he is anxious to get everything started. On Monday, the training camp is scheduled to begin in Las Vegas.

Power forward Love is allegedly going to head to a new NBA team. A member of the 2012 U.S. Olympic team (gold medal winners), Love has the Bulls, Warriors and Cavaliers swinging trades with Minnesota. With him out of the picture for the National team, the pool of players competing for a spot on the U.S. team is constantly changing. After the withdrawal of Blake Griffin, power forward for the Clippers, John Wall (Washington Wizards guard) was added to this pool of competing players.

Blake Griffin decided to withdraw only when Russell Westbrook also stepped aside to be able to come back from the injury he sustained this season while playing for the Oklahoma City Thunder.

Despite all these withdrawals of valuable players, National Team head coach Mike Krzyzewski will surely have plenty of players to choose from as the wealth of candidates is not negligible. Krzyzewski has already steered the United States Basketball team towards two Olympic gold medals (one of which in 2012) so hopes are high for a team that has always performed admirably no matter the conditions.

The training camp starting on Monday in Las Vegas will welcome a multitude of players including DeMarcus Cousins (from the Kings), Kevin Durant (Thunder), Stephen Curry (Warriors), Kyrie Irving (Cavaliers), Derrick Rose (Bulls), James Harden (Rockets) and many more. The National team will try to defend their 2010 world title at the World Cup that is scheduled to begin on the 30th of August in Spain.

If they manage to do so, they will be the third team in history to win consecutive world titles. The other two teams to manage this were Brazil and Yugoslavia.