You are here: Home / Health / Track Your Food Intake with Wristbands from Jawbone 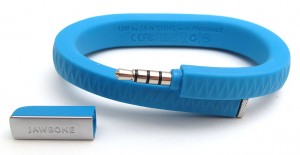 Anyone who has ever gone on a diet or controlled their food intake has seen how difficult this seemingly simple task can be. Keeping a log of things eaten or cataloguing food isn’t easy and it’s not pleasant either. Today, those people and other who are simply health conscious have just received a huge helping hand from Jawbone, a maker of wireless wristbands and headsets. They released a food-tracking service that is bound to be a hit.

Jawbone is a company with the headquarters in San Francisco, California that makes consumer technology and wearable products, such as: wireless speakers, Bluetooth headsets, wristbands and portable audio devices. They own over 200 patents related to wearable technology manufacturing process and some say they’re going to go places in the wearables market. Now they’ve released a new product, their flagship, a software and wristband called Up.

Jawbone Up will allow its users to log food, water and even assess their foods. It can track your activity, sleep, aside from your diet. The app will also offer you restaurant menus, a large food library, and enhanced calorie tracking, which makes it the most complete food tracking app available on the market today.

Jawbone’s main rival is Fitbit Flex, which is a device worn on the wrist. It was released in May 2013 and it tracks the wearer’s movement 24 hours a day and also the sleep patterns. It’s also the first water-resistant tracker available on the market and it can be worn while engaging in water sports and showering. This means that the person wearing it doesn’t have to take it off for anything. Its battery lasts for up to 7 days and it takes around 2 hours to charge, making it quite an impressive device, battery-wise. The Fitbit can cost between $60 and $130, depending on the model.

Another device that will do what the Jawbone Up will do (and maybe more) is expected from Apple this autumn. Apple is thought be release their first wearable device called the iWatch with will include tracking sensors for health and fitness.

Last February Jawbone raised $250 million in venture funding, which can only tell us that they’re a company we’ll hear more about in the near future.

Are you interested in this new wristband from Jawbone? Will you purchase one? What are your thoughts on wearable devices? Share your thoughts with us in the comment section below, we would love to hear what you think about this.