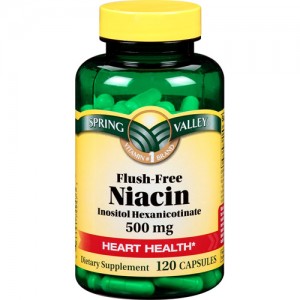 Niacin, also known as vitamin B3 is one of the essential human nutrients. Without the right levels in our blood we would experience nausea, anemia, headaches, tiredness and skin and mouth lesions and even pellagra. It has also been found to decrease the risk of cardiovascular illness and increase the levels of HDL in the blood. It short, we’ve known that niacin was a very good vitamin for the past 50 years.

Now, results from two new studies have revealed side effects from niacin that were previously undiscovered. Niacin is taken in the U.S. mainly for cholesterol-related issues and also to promote a healthy heart. These new results are causing doctors to believe that the new side effects are making the drug too risky to be taken regularly.

The results of the four-year clinical trial that has shed light on the health issues that arise from taking niacin were published in this week’s number of New England Journal of Medicine. The study was performed by careful observation of over 25,000 patients with heart problems that were taking a statin to lower their cholesterol levels. Some were given a placebo drug, while others were given a combination of niacin and laropiprant.

The results of the study saw that niacin really did improve the patients’ cholesterol levels, but did nothing to help the other heart-related problems. Also, they found some side effects of niacin that they had previously not been aware of.

One of the most important negative aspects of niacin was related to diabetes. The patients who already had the disease were 55% more likely to develop complications from diabetes when taking niacin. It also caused GI tract problems (ulcers, diarrhea and stomach bleeding) in 4.8% of participants. Severe muscle pain, infections and gout were also much more common in people who were taking the drug.

Co-author of the study, Dr. Jane Armitage said that the team was obviously disappointed by the results. Doctors are now urged not to prescribe the drug for regular use and that they should warn patients about taking niacin.