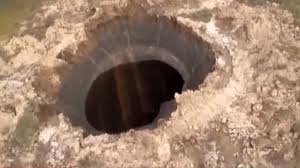 Video of a mysterious 260-foot-wide hole that appeared in remote Russia put a bomb under scientists who are currently trying to find out what had caused it. According to the Siberian Times, the hole is not only very wide, but it continues down into an underground chamber of unknown depth as well. The sides of the crater were said to be fresh earth, which experts revealed indicated that it was created in the last few years.

“We can definitely say that it is not a meteorite,” a spokesman of the Yamal Emergencies Ministry told the Siberian Times. “No details yet.”

The hole was spotted by a helicopter pilot and his oil industry passengers while flying above. The video they posted on YouTube last week pawned endless speculation online about what may have caused the giant crater. It appeared about 20 miles away from Yamal’s biggest gas field.

That’s why experts incline towards an explosion of gas that had built up in a naturally occurring chamber under the surface. That’s because the ring of fresh earth surrounding the hole appears to be a mass of material that has burst out from below.

The Russian peninsula of Yamal extends 435 miles into the Gulf of Ob. Its subsoil is permanently frozen, permanently kept at temperatures that can reach 122 degrees below zero. The sun is seldom seen in winter. The locals are called the Nenets and the name of the place translates to “the ends of the Earth.”

Teams of researchers from Russia’s Center for the Study of the Arctic, along with others from the Cryosphere Institute of the Academy of Sciences, are expected to arrive there today. According to them, the best supposition might be that in places with such large concentrations of gas, it’s not unusual for underground explosions to occur. They happen only when under-soil ice melts and releases a substantial amount of gas. This is a plausible explanation due to the global-warming phenomenon. Once the underground pressures are sufficient, they just blow up.

Another scenario is suggested by Dr. Chris Fogwill, a polar scientist from the University of New South Wales, who claims that the crater might actually be an extreme example of something called a pingo. Pingos are occur when huge chunks of underground ice push their way up to the surface and melt. Since the blocks are usually extremely large, huge holes are created.

“We’re seeing much more activity in permafrost areas than we’ve seen in the historical past. A lot of this relates to this high degree of warming around these high arctic areas which are experiencing some of the highest rates of warming on Earth,” Dr. Fogwill said.