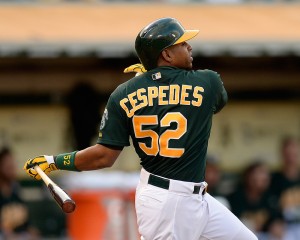 Baseball fans might be more aware of the Gillette HR Derby than the general public, but the latter, too, ought to be pleased to learn that this year’s Home Run event managed to raise a massive amount of money for charity. The sporting event, which took place on Monday night at Minneapolis’s Target field, managed to raise no less than $465,000 in donations for charities. The returning winner, Yoenis Cespedes, was actually set on raising even more money. In a statement made after the game, Cespedes said “I’m very happy that it was that amount. And it should do a lot of good for all these people that do need the money. I only wish that it could have been even more”.

Cespedes, who plays as a slugger for the A’s, has been the designated star of the HR Derby for quite some time. It only makes sense that he should have gotten used to fame, attention and cash by now. By all accounts, he will probably return for next year’s event, which will take place in Cincinnati. If he wins the 2015 Gillette HR Derby, it’s going to be his third straight title, as well as proof that some things never change. This, in spite of the many changes that the Derby has seen lately. The event now has a new sponsor, a new design for the FlexBall, which has been added after the sixth outing and which comes in orange, plus a whole new format.

No doubt about it, Cespedes made a big impact on the donation drive all by himself. Of the $465,000 raised, he personally made $160,000, as each home run was ‘priced’ at $5,000. FlexBalls sent over the wall were worth $10,000 a pop. For that $160,000 Cespedes scored 30 home runs, one of which involved a FlexBall. All in all, there were 82 home runs scored during the event, 11 of which stood at $10,000 a piece, since they involved FlexBalls. The money for charity was raised by Gillette and Major League Baseball together. It will be distributed according to the following plan:

The remainder of the money will be split between clubs belonging to the RBI and the Minneapolis Boys & Girls Clubs. During the 11 years it’s been in existence, the Derby has managed to raise almost $4 million for charity.