You are here: Home / Sports / The Winner of the Classic British GP is Lewis Hamilton 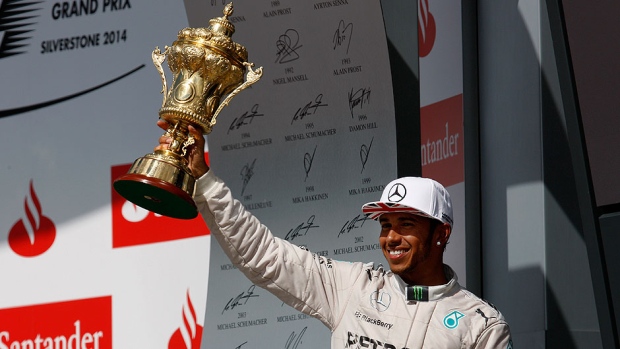 Britain’s Lewis Hamilton has won the British Formula One Gand Prix at Silverstone England. With this he managed to revive his title hopes, as his team-mate, Nico Rosberg retired with gearbox failure. During the race Rosberg was leading by 29 points until his German gearbox started to develop a fault. Just before he could hit half the distance it failed, which completely threw him out of the race. For Hamilton this means that the 29 points lead was reduced to just four points.

William’s Valtteri Bottas was second place from Daniel Ricciardo of Red Bull. The surprising thing is that Hamilton started sixth, with his team-mate on pole due to a mistake in his final qualifying lap. During the race, a heavy crash involving Ferrari’s Kimi Raikkonen occurred (Felipe Massa of Williams clipped Raikkonen across the tracks, as he collided into the barriers). At this point, Hamilton was in fourth position, but it received a red-flagged.

The race was stopped in order to repair the barriers, and Raikkonen was taken to the medical center. After nearly one hour the race started again. Hamilton let Jenson Button’s McLaren build a 5.7 second lead while he conserved his tires. During lap nine he finally decided to make his move. By the time he was done with his pit stop, he was 5.9 seconds behind. On lap 27 he won back two seconds because his team-mate, Rosberg started experiencing up-shift problems. As much as he struggled, Rosberg had to pull off and retire in the end. This left Hamilton in a comfortable lead from Bottas.

In an official declaration, on the podium, Lewis Hamilton declared the following:

I honestly feel I had the pace today (…) I never want to see my team-mate fail like that. I was looking forward to a wheel-to-wheel battle, but I’m sure we’ll get many in the future.”

It all worked out for Hamilton in the end. He took the lead after 29 laps (when Rosberg retired from the race). He won the race with a 30 seconds lead from Finn Valtteri Bottas (who started 14th at the beginning of the race). The third runner-up was Daniel Ricciardo of Red Bull. He finished before Jenson button, and Sebastian Vettel. On position number six was Fernando Alonso of Ferrari.

But this wasn’t Hamilton’s first win. It is actually the fifth this year, the 27th of his career and the second in his home event. He was extremely happy for his victory, especially after having miscalculated his chances in the qualifier stages on Saturday.

As for Raikkonen’s injuries, they are not severe. His car was massively damaged but he managed to limp away on his own two feet. He will require X-rays on his right ankle but doctors say he will be fine.