Search teams are working hard in Washington State and it seems that their efforts are giving results. The teams have found the remains of a person who appears to be the last Washington mudslide victim, which took place in March and took the lives of 43 people.

The Snohomish County Sherriff’s Office have said that the body of the victim is thought to belong to Molly Kristine Regelbrugge (44). It was located on the western edge of the site of the disaster this morning. Medical examiners are working to confirm the identity of the body once the remains are recuperated. 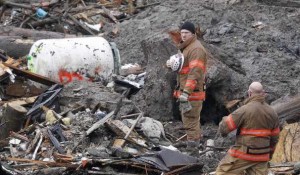 On March 25 the remains of Kristine’s husband, L. John Regelbrugge III, U.S. Navy Commander, were discovered. Her body was found in debris that police investigators believe to be the garage of the couple’s home, 100 yards from her husband’s body was found. This information was released to the public by the Seattle Times.

The couple were among the 43 people who have lost their life after a hillside collapsed on the north fork of the Stillaguamish River. The collapse caused a torrent of mud to cause damage on Steelhead Heaven, an enclave outside of Oso, Washington, located 55 miles from Seattle.

The landslide was declared to be the deadliest landslide in the history of the United States. More than 50 homes were simply swallowed by the landslide that took place on March 22.

The cause of this horrible accident was declared to be the three weeks of heavy showers that preceded the landslide. The National Science Foundation wrote up a 186-page report that said the rain played a major role in triggering the landslide. Still, the scientists could not say for sure what the cause behind the landslide was and if the logging in the area played any part. The river valley is known to have a history of landslides.

Our investigation is not intended to be a final, conclusive study of the landslide, and we did not seek to unequivocally establish causative factors.

What they could say for certain was the fact that an earthquake was not the cause that triggered the slide, as there was no significant seismic activity before the disaster that could have caused the mudslide.

What are your thoughts on this news? Did you follow the news about the March Washington mudslides? Would you like to share your thoughts with us in the comment section below? Drop us a line!