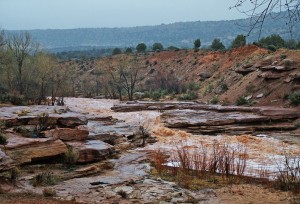 Hurricane Arthur put a damper on Independence Day parades in many cities across the United States and it looks like Utah, too, saw more than just fireworks in the sky, this 4th of July. The southwestern part of the state expected to see flash moisture floods, lighting, as well as increased humidity and very high temperatures. High temperatures are no longer news in Utah this year, as the Beehive state has been seeing one of its hottest summers yet. However, a front of “monsoonal moisture”, as described by the National Weather service, also threatened to bring on the risk of floods.

Reports from the National Weather Service drew attention to the monsoonal weather fronts and said that some isolated thunderstorms might give rise to strong gusts of wind. They also warned against perilous thunders, throughout the southern and western parts of the state. The experts issued the warning for roughly two thirds of the state’s territory. They added that the probability of rainfall would increase over the weekend. Lower areas in Utah were also pegged as likely to experience flooding.

At the same time, the weather service announced that temperatures would be rising to nearly 100 degrees. Last year, there were four heat-related deaths in Utah, so the weather service experts also issued health warnings caused by the heat wave. They advised Utahns to be extra cautious during this weekend’s Fourth of July celebrations and even posted a list of tips on how to deal with the heat and still enjoy the leisure activities. Some of the more important pieces of advice include never leaving pets or children unattended in hot vehicles, drinking plenty of water, scheduling outdoor activities for later and cooler times of the day, and packing water, maps and/or GPS devices along on hikes.

Aside from health warnings, the advisory also issued a danger warning for wildfire. The “Red Flag” warning will be in effect until Wednesday at midnight. It applies to several sections of the state, from Nephi in the south, to Richfield and St. George in the west, and further south and east, all the way up to Bruce Canyon and the National Park of Zion.

Furthermore, the Utah Division of Air Quality also came out with an unhealthy “orange” code for the quality of air in the state. The prediction applies for July 4th in the counties of Salt Lake, Weber, Davis, and Utah. There’s a compromised “yellow” code for air quality in the Box Elder and Tooele counties.