You are here: Home / Health / Head-banging Could Cause Rare Brain Injury, Say Researchers 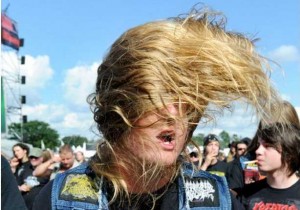 A report that was recently published in the medical journal The Lancet details the case of a rare brain injury experienced by a head-banging Motorhead concertgoer. The same report goes on to add that not all head-banging will produce the same effects, though. It’s interesting to note that a major metal rock band has made it into a medical journal – one doesn’t see this too often. But it’s all because of an overzealous fan, who, unbeknownst to him, opened the door for groundbreaking medical research.

The British academic publication tackles the habit of head-banging, which has been practiced at rock, punk, and metal concerts roughly since the 1970s. The ‘dance move’ involves violently swaying one’s head to the back and to the front and is usually performed by people with long hair, to the beat of the music being played. One particular German fan of the metal band Motorhead actually got a brain bleed after such vigorous head-banging, say the researchers. The team from department of neurosurgery at the Hannover Medical School adds that “while such shows are enjoyable and stimulating for the audience, some fans might be endangered by indulging in excessive headbanging”.

The researchers who authored the paper cited above explain that such a condition is, indeed, rare, but address it nonetheless, because, as they say, it’s evidence that Motorhead is “one of the most hardcore rock’n’roll acts on earth”. They also decided it was important to provide a scientific account of this medical issue, as a warning both for the medical, as well as for the musical community.

However, many music lovers and musicians expressed their objections to this case study. One head-banger, who also happens to be a bass player, says that he has, indeed, experienced ‘bang-overs’ after heavy head-banging. They usually only consist of some neck strain and headaches. Another one, a singer with a Canadian band, cited by the Toronto Star, as the one before her, says she’s never injured herself, even though she regularly engages in head-banging on stage. Yet the guitarist of Megadeath, David Mustaine, did have to undergo neck surgery for stenosis, in 2011. This painful affliction, the musician explained, was caused by years of head-banging.

The case explored in the study is that of a 50 year-old man, who arrived at the Hannover Medical School in January 2013, after experiencing two weeks of headaches. The pain was just growing stronger and more persistent with time – so the doctors revealed he was suffering from a subdural hematoma (blood clot). The clot was caused by the head-banging and the surgery took six days to heal.