Great joy overcame the LGBT community in Florida’s most gay-friendly county, Miami. A judge ruled yesterday that same-sex couples can marry, thus siding with the Florida Keys same-sex couple who said the voter-approved ban on same-sex marriage was discriminatory. Unfortunately, an immediate state appeal was given that blocks gay marriage licenses.

Judge Luis M. Garcia gave his OK to the same-sex couples who wanted to get their marriage licenses, but Pam Bondi, Republican Attorney General, says the voter’s will needs to be respected. She will be appearing in new Smyrna Beach for a Chamber of Commerce lunch on Friday afternoon to discuss the appeal. 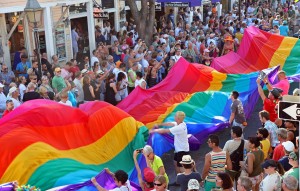 The majority of voters had their say and the definition of marriage was set as being a union between one man and one woman. This appeal manages to create a stay that prevents any marriage licenses between same-sex couples to be issues.

Judge Garcia used other similar moments in America’s history when the courts guaranteed civil rights of the minorities. He stated that the ban on same-sex marriage violates the 14th Amendment of the U.S. Constitution:

The court is aware that the majority of voters oppose same-sex marriage, but it is our country’s proud history to protect the rights of the individual, the rights of the unpopular and the rights of the powerless, even at the cost of offending the majority. When Nazi supremacists won the right to march in Skokie, Illinois, a predominantly Jewish neighborhood; or when a black woman wanted to marry a white man in Virginia; or when black children wanted to go to an all-white school, the Constitution guarantees and protects ALL of its citizens from government interference with those rights.

Florida has been a battleground for the right of the LGBT communion since the early 70’s when singer Anita Bryant managed to overturn an ordinance that banned discrimination against gays. But in 1977 Florida became the only U.S. state prohibiting gay people from adopting. The law stood until 2008 when a judge claimed it had no rational basis. Who knows what’s next for the LGBT community in Florida?

What are your thoughts on this turn of events? Do you oppose gay marriage? Do you believe that a marriage should be a union between one man and one woman? How did Florida’s gay-friendliest state managed to vote against same-sex marriages? Share your thoughts with us in the comment section below.