You are here: Home / National News / Father of Teens Accused of Beating Homeless Men to Death Says They were Also Once Homeless

Three teens admitted to attacking two homeless men and beating them to death with bricks and a metal pole. The teens are 15, 16 and 18 and during a hearing on Monday, a judge set bond at $5 million for each. They will be prosecuted as adults.

Now, man who claims to be the father of two of the teens charged with murder speaks out and says that the teens were also once homeless and that he has no idea what caused the boy to act so violently. 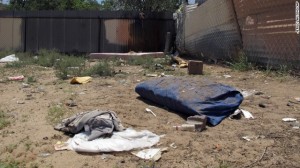 Victor Prieto, the father of the 15 and 16-year-old boys had this to say about his sons, who have left their two victims unrecognizable after their attack on Friday:

It’s so hard that he could do that to someone where … I mean, like I said, we came from there. You know what I mean? We’re not there now, but that’s where we … We got out of there.

The two minor boys are not being identified by the Associated Press because of their age, but the 18-year-old is named Alex Rios. The three boys apparently have been targeting homeless people for one year prior to the beating. According to a criminal complaint, they have attacked around 50 people over the couple of months, but they’ve never done more than assault them.

The teens used cinderblock among other things, to beat the men on Friday. Their attack on the men lasted for over an hour and according to the criminal complained, the 15-year-old boy accused of murder, told the police that they raised the homeless men above their heads and took turns dropping them on their faces and heads.

The 15-year-old said that he was angry on Friday because he broke up with his girlfriend, so he and two of his friends put black T-shirts on their heads and went out to look for someone to beat and rob.

Alex Rios said that he acted as a lookout while the two boys beat the men with sticks, bricks and a metal pole. The two younger suspects told the court and the police that Rios also tool part in the beatings.

Police have yet to identify the victims due to the severity of their injuries. Their attack on the homeless was so brutal that it even left veteran police officer speechless. What are your thoughts on this attack? Care to share your thoughts with us in the comment section below? Drop us a line!