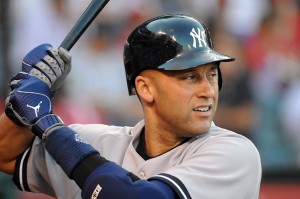 Fans all over Minneapolis are turning the city into a virtual screaming scene, for the occasion of Derek Jeter’s last All-Star game. Not only is the game itself causing a ruckus all over Minneapolis, but the presence of Jeter himself is at the heart of a lot of the hysteria. For one thing, his fans have been queuing across the street from the hotel in downtown Minneapolis where the players are staying. For another thing, Jeter can’t even walk out into the street without a legion of fans screaming upon seeing him.

Emotions are also running high on both teams that are about to go head to head in the upcoming game. Jeter’s teammates, for instance, are extremely exciting and referring to the game as one of the biggest thrills of their lives. The players on the opposing team, however, are already planning for the way they’ll celebrate their win of the game.

Amidst all this outpour of emotion, reports are saying the only person keeping calm is Jeter himself, the current shortstop of the New York Yankees. He’s been getting all the more attention ever since word got out that Nike had shot a star-studded video ad, set to air right before he steps up to the plate, before the game on Tuesday evening. The commercial features all the big names in new York you can think of, from the president of the New York Knicks (Phil Jackson) to Jay-Z, to Tiger Woods, to Michael Jordan. In the meantime, with what might be Derek Jeter’s last All-Star game coming up in a matter of hours, the man himself appears just as calm and composed as ever.

Jeter was recently interviewed in the run-up to the game. During the interview, he explained he’s not about to change his behavior, gushingly express how he feels, or do anything differently than before, really. He was asked if he plans on giving a speech before his teammates on the American League All-Star, like his teammate Mariano Rivera last year. Even though this 14th All-Star game might be the last one ever for Jeter, the player said he has no intention of holding a speech. Likewise, he turned down Fox Sports’ offer of wearing a microphone during the game, and didn’t even ask for extra tickets to the game for his family and friends. He said he’ll have six or seven near and dear ones rooting for him during the game – no different than usual.

Jeter specifically explained he doesn’t like discussing what his emotions during the game might be. “I don’t go into things with expectations. I’m looking forward to playing the game, and I pretty much stopped it right there. I’ve always enjoyed the All-Star Games, and I’ve always appreciated it, so I don’t think I’ll treat this one any differently. Everybody wants me to be so emotional all of the time, but I’m coming here to play the game, and anything else that comes with it, I don’t know.”