The world is facing the largest and deadliest Ebola outbreak in the history of the modern world. With a death rate of around 60% and no known treatment or vaccine, the Ebola virus infection is one of the biggest and most dangerous killers known to man. Right now, though, there might be a little hope present as a new experimental Ebola serum is used to treat a U.S. patient in Liberia.

The experimental serum is going to be tried on a U.S. charity worker currently in Liberia who is struggling for her live. Unfortunately there wasn’t enough to go around for anyone else, and the doctor who made the choice to give the serum to her is also sick with the Ebola virus. 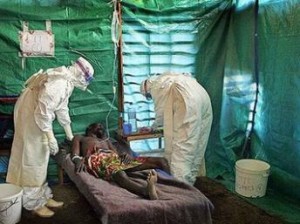 Dr. Kent Brantly made the selfless decision of giving the serum to his colleague, Nancy Writebol,  and tried another alternative and experimental treatment on himself. He used a blood transfusion from a young boy who survived the virus.

Franklin Graham, the president of Samaritan’s Purse said in a statement yesterday:

Yesterday, an experimental serum arrived in the country, but there was only enough for one person. Dr. Brantly asked that it be given to Nancy Writebol. However, Dr. Brantly received a unit of blood from a 14-year-old boy who had survived Ebola because of Dr. Brantly’s care. The young boy and his family wanted to be able to help the doctor that saved his life.

Dr. Brantly has demonstrated once again how Jesus sacrificed for us,” he said. “We pray for Kent’s full recovery and healing.

The experimental drug has not yet been made public. There are several drugs that are currently being tested. Some of them are based on the antibodies that the human body produces when it is infected with the disease. The antibodies can help the body fight infection, but that’s not always the case.

The WHO (World Health Organization) declared that 1,323 people have been infected with Ebola and 729 have died. The disease is not contained and it could easily cross more borders.