You are here: Home / Business / Crumbs is Shutting Down Its Stores: America Is Over Cupcakes, It Seems 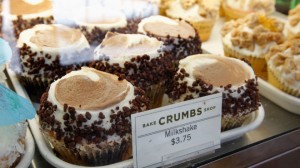 Over the course of this week, the Crumbs Bake Shop which seemed to have such promising odds has shut down all of its 48 stores. The chain had been planning, a while back, to open over 200 new locations nationwide, but expanding beyond its New York territory proved to be difficult. After struggling for some time with this expansion, Crumbs announced that it is shutting down its stores, since it lost tens of millions of dollars and currently owes more than $14 million. The company is also considering whether to file for bankruptcy or not and even its website is not online anymore (since this afternoon). The failure of a giant in the market of baked goods – supposedly everyone’s favorite thing – may indicate that after the initial craze, America is over cupcakes.

The very crowded and thus very challenging baked goods market has exceedingly outdone itself over the course of the past few years: 24 hour cupcake machines, custom made gourmet varieties, the four inch cupcake (made a while back by Crumbs) and so on. The company tried to keep up the pace even with out-of-the-way cupcake ATMs, but to no avail. Strangely, it seems that the failure to captivate the public isn’t necessarily caused by a competitor having a better offer, but by a generalized fatigue in the consumers’ enthusiasm for baked goods in general and cupcakes in particular. Some say that the reason for which America is over cupcakes is purely related to food trends and fashion, other voices say that people are more aware of healthy food choices and cupcakes aren’t really on the list of desirable nutrition.

The rise of other businesses, focused on offering healthy food options or places to work out, may indicate that the drop in popularity for cupcakes may be a real phenomenon. On the other hand, it shouldn’t be ignored that the downfall of Crumbs is also due to its too rapid expansion plans which weren’t too realistic to begin with. This was coupled with other bad management decisions which Crumbs was criticized for, like maintaining larger spaces than they needed in most of their locations and so on.

Besides the strict story of Crumbs, it can’t be denied though that the category of specialized desserts isn’t as much of a safe business bet as it used to be. Even more, the recent trends suggest, as previously stated, that America is over cupcakes, after having its fill of them. So, even though this particular bake will still be available as a classic in most areas, the new food crazes will likely target something else.