It was announced today that 157 passengers spent one night on a whale-watching boat that was stranded 15 miles off the Massachusetts coast due to a lobster trap rope that snagged the ship. The passengers are now safe and sound and back on dry land after spending an entire night at sea, right outside Boston.

On Monday, the boat that was carrying 157 passengers got snagged by a lobster trap rope 15 miles of Massachusetts and got released with the help of divers, who managed to free it on Tuesday morning. The boat arrived safely at the harbor at around 8 a.m. All passengers were unharmed, as were the 6 crewmembers.

A spokesperson for Boston Harbor Cruisers, Sheila Green, says that the passengers approached the dock smiling and waving and that they weren’t in any distress. She also added that they will be fully refunded on their $50 ticket, they will also receive a $100 gift card for any future Boston Harbor Cruise and also $500 in cash for any distress they may have experienced. 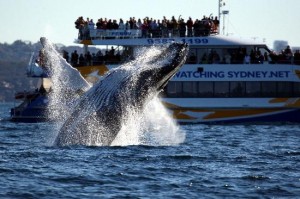 The passengers were given blankets to stay warm during the night and they were also given food and drinks. The entire trip was supposed to last for three hours, but it ended up staying at sea for an entire night. The Boston Harbor Cruises vessel is specifically used for whale watching; one of the propellers became entangled in the rope.

One of the passengers on the boat, Ken Maguire said the boat stopped 10 minutes into the trip back to the dock after it was obvious that it had hit something. Nobody on the boat required any medical attention and there were no injuries.

Whale watching is one of the most popular tourist attractions in the Boston area.

What are your thoughts on this story? How would you have reacted had it been you stranded at sea for a night? Share your thoughts with us in the comment section below, we would love to hear you out.