You are here: Home / Sports / Argentina Supporters Don’t Love Lionel Messi as Much as Diego Maradona Yet 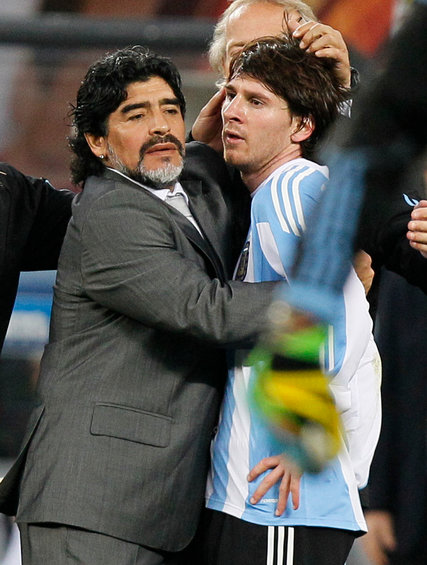 Messi may have been named player of the year for the fourth time in a row, he may be considered the world’s best soccer player, but supporters from Argentina still do not accept him fully. In Rio de Janeiro, Argentine fans unfurled a banner with Diego Maradona on one side, Lionel Messi on the other, and Pope Francis in the middle. even cheered and chanted “Ole, ole, ole, Messi, Messi!”. Although they have accepted Messi, the relationship between him and his fans is still complicated. The only way to become completely adored by this tough crowd is by winning soccer’s ultimate prize against Germany, this Sunday (this is what Maradona achieved in 1986).

Don’t get us wrong. Messi, age 27, is fully welcomed in Argentina. He is the team captain, and the entire national team has been built around him. His achievements are incredible, especially in the World Cup. Javier Mascherano, Messi’s teammate in Argentina actually states that he gives the country an illusion. He can make people believe they can be champions once more.

“He is from outer space” – Javier Mascherano

“If he wins the World Cup, he will be the best player of all time. Maradona is famous around the world (…) I don’t know anyone who doesn’t like Messi.” – Ivan Ramadan

These declarations may be true, but there is still an air of distrust and segregation between Messi and his Argentine fans. This is probably because Messi rose to stardom in Spain, not Argentina. In addition to this, some of his major successes were seen on television, not on the stadium.

Here’s a quick comparison between the two soccer titans, Messi and Maradona. Messi has scored 42 goals in 92 games with the national team, and five goals in 14 World Cup matches, while Maradona scored 34 goals in 91 national games and eight goals in 21 World Cup appearances.

The main problem remains: Argentine fans feel that Messi has yet to give to them, what he has already given to Barcelona. The viewing in a Buenos Aires apartment on Wednesday didn’t help him either: he did not touch the ball in the penalty area until the semi-final extended to 120 minutes.

Diego Ferreiro, the apartment owner also stated that Maradona used to play fiercely, even when injured. “This boy, no (…) It’s impossible that he will reach Maradona.” he added.

How can you surpass a legend? For Maradona, the game was in his blood, not only head and legs. Take the 1986 World Cup as an example. During the matches he assisted 10 out of the 14 goals scored, and executed two of soccer’s most famous goals (the slalom through England’s defense was actually considered to be conjured by the hand of God by fans). In the 1986 national pride was restored, whereas a victory now will only be viewed as a soccer triumph.

There are many opinions: many love Maradona’s anarchic and reckless eccentricity, while other say they Messi’s seeming rectitude is good.

“He is a serious footballer, Maradona is loco.” a fan declared

All in all, some things are clear. Argentina has the no.1 player in the world. The pope is also from Argentina. There are many great individual values in this country, the only problem is when they try to come together. If Messi manages to pull off what Maradona managed in 1986, his legend will be passed on with the same enthusiasm as that of his predecessor.

“If Messi gives us the World Cup, he is going to be eternal.”