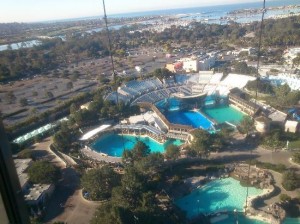 Sunday was a pretty bad day for 46 visitors who happened to enjoy the SeaWorld San Diego Skytower. A power failure left the 46 guests and 2 employees suspended at 220 feet in the air, as the Skytower got stuck for four hours.

In case you’ve never been to San Diego and never took a ride with the Skytower, this is basically an elevator ride that takes you inside a revolving capsule at a 320-feet height for a panoramic view of everything important in the area. The Skytower advertisement highlights sights such as Mission Bay, the San Diego historic skyline cityscape and, of course, the Pacific Ocean as the main attractions. According to the Skytower description,

with clear skies, you can see up to a hundred miles in every direction

But there weren’t clear skies that made the Sunday’s visitors day, nor the sight seeing. Unfortunately, on Sunday, the Skytower power failure, whose technical causes weren’t found to this date, left people with little more than a sky – high feeling and the panoramic landscape view of a lifetime.

The failure left the visitors stranded high above with little to no choice than wait patiently for the problem to get solved. If we are used to short power failures which last a few seconds or a few minutes at most, it was not the case with the Sunday Skytower guests. They had to wait there for about four hours and we guess they weren’t so happy about the view after the first.

The Skytower power failure occurred, according to the officials, around 3:30 p.m. However, the 46 people who got trapped inside the capsule at a dizzying altitude were constantly supervised by the park’s staff who were there with them. They were held in an open line of communication at all times and they also received water and snacks from the park’s employees.

Four hours later, around 7.30 p.m., the power got restored and the guests were safely taken down. The park’s staff together with the city fire department supervised the safe descending of the trapped guests. The nightmare ended with very few problems, as nobody reported injuries or trauma. Among all the 48 people stuck in the Skytower capsule, one 17-year-old boy had to be taken to the hospital and treated for a case of (very justified) anxiety, according to Lee Swanson, the San Diego Fire-Rescue Department spokesman, quoted by CBS News via the Associated Press.

The guests were never in danger and park officials were in constant communication with them while the power failure was being addressed.