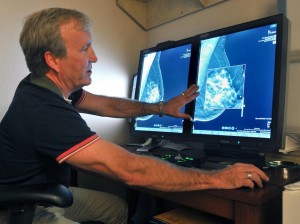 Detecting breast cancer is one of the biggest goals, at which scientists from around the world are hard at work and it seems that a new type of technology may be able to improve the current statistics. A massive study, currently being undertaken at the Massachusetts, as well as at twelve other medical facilities around the United States, took a closer look at almost 500,000 breast scans, conducted over the course of two years, from 2010 to 2012. The research has found that 3D breast scans are able to accurately detect more instances of cancer and also return fewer false positive and negative results.

Standard digital, or 2D breast scans have come under serious criticism, for several reasons. On the one hand, in the past they failed to recognize the presence of breast cancer in actual sufferers of the disease. On the other hand, they returned false positive results, which determined numerous women to undergo biopsies which they didn’t really need. The newer technology, which is referred to as either 3D screening, or tomosynthesis, will hopefully become the norm over the coming couple of years. As things stand right now, only almost 1 in 6 women who do have their yearly breast screenings go in for the 3D scan.

The preliminary results of the study, which compares 2D and 3D breast scan results, is tilting the scales in favor of tomosynthesis. Out of 1,000 women who took a standard digital breast scan, 3 were found to be suffering of an invasive form of the disease, which had the potential to end their life. In comparison, a little over 4 out of 1,000 women who underwent tomosyntheses as well as standard scans were found to suffer from similar forms of the disease. Tomosynthesis appeared on the medical market in 2011.

The results of the study, which was financed by the National Cancer Institute in collaboration with Hologic, were published on Tuesday, in the Journal of the American Medical Association. It’s worth noting that Hologic, a company based in Bedford, is the only manufacturer of the 3D scanning equipment present on the U.S. market. 3D breast scans are performed exactly like typical mammograms. The breast is sandwiched in between two metal plates – but the camera takes more pictures than in a typical 2D imaging procedure. 15 shots are taken, from all possible angles, and they are then combined to create a 3D rendering of the breast, which is examined layer by layer. In a standard 2D x-ray, radiologists are delivered a bird’s eye view of the breast.