You are here: Home / Tech & Science / Scientists to Save Unusual Coral Found in Miami, Dredjing Project to Resume

An unusual hard coral from an unlikely underwater garden was found at the bottom of one of the world’s busiest shipping area. This coral might be holding clues about how sea life adapts to the climatic changes and that’s why this coral is now growing in Government Cut.

This channel was created more than a century ago that connects Port Miami. Currently, the channel is undergoing dredging project to deepen the sea floor by 10 feet for a new giant ships to pass. 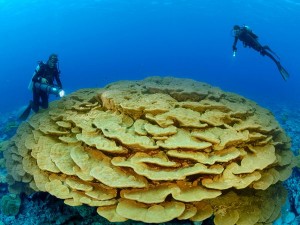 The team of engineers hired by U.S Army already removes endangered corals. Remaining corals called as “corals of opportunity” can be retrieved with a permit.

Scientists say, they only had 12 days between when the permits were issued last month and the start of dredging, which wasn’t enough to save the colonies.

Andrew Baker, a University of Miami professor and coral biologist who researches the effects of warming oceans and acidification on coral said, “There are just thousands of corals out there, so it’s really a mammoth task. This could be the seed population for climate-tolerant corals, and we’re wiping them out by literally blowing them up”

The corals are significant because some of them (40 years old) including a variety of corals including brain, flower, great star, cactus and mustard hill have acclimated to the unnatural conditions of climate and other manmade activities.

Corals look like plants, but they are actually animals and can be moved only with a permit. According to Baker, these Corals will help us know how they adapt in warm oceans.

They are also important to protect costs from storm surge. Recently a team of scientists published a study in Nature Communications – an online journal finding that coral reef can act as a natural barricade, breaking up wave action by as much as 97 percent.

Lots of Corals are already lost, thus it necessary to save the remaining. Scientists are working towards it and this is one of the attempts.