Scientists have found the oldest DNA evidence yet of humans’ biological history. But instead of neatly clarifying human evolution, the finding is adding new mysteries. In a paper in the journal Nature, scientists reported Wednesday that they had retrieved ancient human DNA from a fossil dating back about 400,000 years, shattering the previous record of 100,000 years. The most well-known late archaic humans were the Neandertals.  More Neandertal skeletons have been found than any other ancient human species.  They lived in Europe and Southwest Asia from at least 130,000 years ago until around 28,000 years ago.  This is in the late Pleistocene Epoch.  It is likely that the Neandertals evolved from Homo heidelbergensis in Southern Europe.

Neandertal-like skull characteristics have been found in 400,000 year old fossils from Spain.  The Neandertals adapted physically and culturally to the ice age conditions that prevailed during much of their time. No other ancient people have aroused more controversy and confusion over the last century and a half than the Neandertals. There is an on-going debate on whether they should be considered Homo sapiens.  If they were members of our species, they were a different variety or race (Homo sapiens neanderthalensis).  On the other hand, if they were dissimilar enough to be a distinct species, they should be called Homo neanderthalensis.

“It is now clear that the full suite of Neanderthal characteristics didn’t evolve at the same pace,” said Juan-Luis Arsuaga, a paleontologist at the Complutense University of Madrid and the lead author of a study published in this week’s issue of the journal Science.

In the report, Arsuaga and his colleagues lay out their scenario for human evolution based on an analysis of 17 reconstructed skulls found deep within the Sima de los Huesos cave in Spain. Arsuaga said the findings were consistent with a ‘Game of Thrones’ evolutionary saga with communities of humans and their distantly related kin competing for habitat more than 400,000 years ago. During that era, glaciers were creeping southward from northern Eurasia adding to the evolutionary pressure on different groups of hominins, a category that includes modern-day Homo sapiens, now extinct Neanderthals and other humanlike species. ”

“These are the earliest Neanderthals,” says Juan Luis Arsuaga. “They can tell us a great deal about the evolution of Neanderthals, and by comparison, about modern humans.”

Since the 1970s, Spanish scientists have brought out a wealth of fossils from the cave dating back hundreds of thousands of years. “The place is very special,” said Dr. Arsuaga, who has found 28 nearly complete skeletons of humans during three decades of excavations. Based on the anatomy of the fossils, Dr. Arsuaga has argued that they belonged to ancestors of Neanderthals, which lived in western Asia and Europe from about 200,000 to 30,000 years ago.

The first discovery of Neandertal bones may have been during the late 1820’s in Western Europe.  Subsequently other better documented Neandertals were found and stored in museums without being recognized as early forms of humans.  In 1839, for instance, a portion of a child’s skeleton was found in Engis, Belgium.  In 1848, an adult female skull was found at Gibraltar, at the southern tip of Spain. 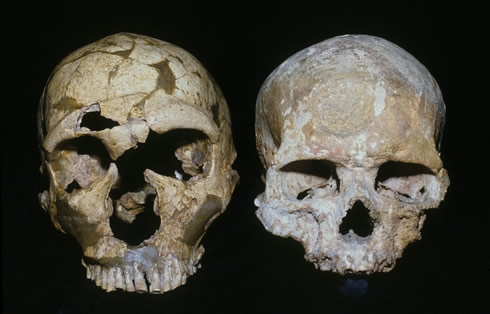 In 1856 a discovery was made in Germany that finally sparked the recognition that these were, in fact, not just strange looking modern people.  This was the discovery of a skull and a number of other bones from a limestone cave deposit in the small Neander River Valley near Dïüsseldorf.  Thinking that they were from a bear, the quarrymen gave them to a local school teacher and amateur naturalist, Johan Karl Fuhlrott. He recognized them as being human but somewhat different from those of modern Europeans.  When several leading paleontologists and medical pathologists in Germany became aware of the fossils, a disagreement developed about who the ‘Neandertal Man’ might have been.  It was suggested that he had been an old Roman, a Dutchman and even a Central Asian soldier in the service of the Russian czar during the Napoleonic wars of the early 19th century.  The reality that these bones were from an earlier variety or species of human was not yet conceivable to most of the scientific world in the 1850’s.

What finally convinced the scientific community that Neandertals were very ancient Europeans was a combination of additional fossil discoveries and new perspectives that largely began with the publication of Charles Darwin’s On the Origin of Species in 1859.  This seminal work in biology popularized the idea that species of living things evolve over time as a result of natural selection.  Subsequently, it was not a major leap in understanding to realize that humans also must have evolved from earlier forms.  In fact, Darwin proposed just that in his 1871 influential publication The Descent of Man, and Selection in Relation to Sex.  For enlightened Victorians, the Neandertals ultimately came to be seen as important human ancestors.  They were given the name ‘Neandertal Man’ in 1864 by William King, an Irish anatomist.  He named them after the Neander River Valley.

Around the same time as that discovery, Russian collaborators sent the Max Planck team 80,000-year-old fossils they had found in a cave in Siberia called Denisova. When the German scientists sequenced the entire genome from the finger bone of a girl, it turned out to be neither human nor Neanderthal, but from a separate lineage, which Dr. Paabo and his colleagues named Denisovans.

Dr. Meyer is hopeful that he and his colleagues will be able to get more DNA from the Spanish fossil as well as other fossils from the site to help solve the puzzle they have now stumbled across.