The students at the University at Buffalo (UB) participated in a NASA contest held this week at its Johnson Space Center in Houston, Texas.

For the competition, the teams had to build a rover that could cross a series of hurdles in NASA Johnson’s Rockyard, a test area that simulates Mars.

The participants had designed and assembled their own robotic vehicle similar to Mars rover that also includes a custom-made 3-D printed arm. The UB students drove the model Mars rover over rocky terrain with the help of an Xbox controller in hand.

Some of the interesting features of the UB vehicle include,d four-wheel drive, an independent suspension system on each wheel and tank-style steering.

Although most parts were purchased, students built the suspension, wheels and mechanical arm. The latter was fabricated in a UB engineering lab with a 3-D printer.

To compete in this interesting contest, the rover required to climb a 30-degree slope, cross sand and gravel pits and collect rock samples up to 8 centimeters.

The RASC-AL Exploration Robo-Ops Competition is sponsored by NASA and the National Institute of Aerospace. Eight teams of undergraduate and graduate students from UB, the Massachusetts Institute of Technology, the University at California, Berkeley and other schools participated in the competition.

Under the game rules, each team could send three students and a faculty adviser to Houston, the rover had to be controlled remotely by students at the team’s university. 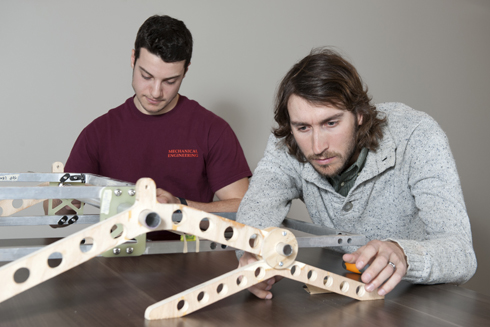 The UB Space Bulls, which includes 16 engineering and communication students, sent commands to their rover, Astraeus I, over the Internet from the North Campus.

“It’s amazing to see theory from the classroom, hobbies and a desire to do something cool merge to bring students and faculty together to accomplish tasks that seem simplistic, yet have such huge implications to the space exploration experience for NASA, and aspiring engineers and computer scientists,” said Kevin Burke, one of the assistant professors under whose guidance the team worked. The other assistant professor was Jennifer Zirnheld. They both are assistant professors in the Department of Electrical Engineering.

“I’m excited about going to Houston. “I get to go to the Johnson Space Center, meet great engineers and watch the rover. It’s a great end to my time here at UBa,” William Dell’Anno, Space Bulls team leader and 2014 electrical engineering graduate, said before leaving Buffalo.