You are here: Home / National News / Growth In Population Remarks The Big Comeback Of Great White Sharks In US Coasts

Fears that great white sharks are at risk of extinction around the US west coast appear to be wide of the mark, researchers have said. There have been growing concerns about the fate of the species with one report suggesting there were just 200 left in one of its favoured grounds, off the coast of California.

A new study by NOAA Fisheries however says that the figures are far higher by a factor of around ten, easing calls that the predator should be on the endangered species list. The study which NOAA touts as the most comprehensive ever on seasonal distribution patterns and historic trends in abundance of great white sharks (Carcharodon carcharias) in the western North Atlantic Ocean used records compiled over more than 200 years to update knowledge and fill in gaps in information about this species.

In the 1970s and 1980s, relative abundance data indicated that white shark populations declined, likely due to expanding commercial and recreational shark fisheries. However, from the early 1990s onwards, abundance has increased. 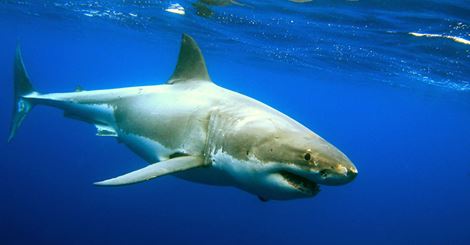 “The good news is that white sharks are returning to levels of abundance,” George Burgess, director of the Florida Program for Shark Research says. Burgess led the new study which was published earlier this week.

The recent observations are in stark contrast to the alarming low numbers left by a 2011 Stanford University study. The results from that survey led to petitions by conservationists to add white sharks to state and federal endangered lists, Burgess said. “We stand firmly behind the findings of our study, and our ongoing research only increases our confidence in its accuracy,” Stanford researcher Barbara Block said in an emailed statement. Great whites are the largest of the predatory big-toothed, flesh-eating sharks, growing as big as 20 feet long.

Marine biologists welcome the news but it may be ominous for some vacationers this summer.

“This is a real pleasure for us in the biology business to be talking about because it’s a success story,” Burgess said.

Despite their name recognition, the sharks made infamous by the movie ‘Jaws’ are rather mysterious in the wild and it’s difficult for scientists to get a handle on their population size.

The study also found that great white sharks occur primarily between Massachusetts and New Jersey during the summer, off Florida during winter and with a broad distribution along the U.S. East Coast during spring and fall.

During winter most white sharks are found off the northeast coast of Florida, the Florida Keys, and in the Gulf of Mexico offshore of Tampa Bay, Florida, where they have generally been considered rare.

In spring, the distribution expands northward and by summer most sharks are found in the waters off New York and southern New England and around Cape Cod. In August, some large juvenile and mature individuals reach Newfoundland and the Gulf of St. Lawrence, the northernmost limit of their range. During fall most sharks remain in northern latitudes but begin to shift southward in November and December.