The Galaxy Tab S, promoted by Samsung as the company’s “thinnest and lightest tablet to date”  features a stunningly thin design, great security features and one of the best displays around. The tablet comes as a competition to the rival Apple when it comes to tablets.

The launch comes at a time when it’s widely perceived that the demand for tablets is slowing; IDC, for instance, has lowered its forecast for 2014 tablet sales. 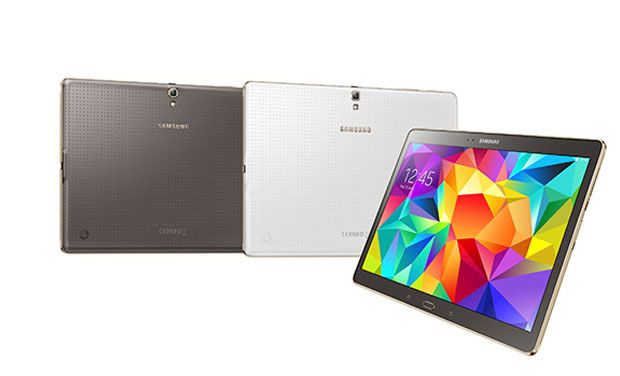 The new Galaxy Tab S tablet is available in two sizes: 8.4 inches and 10.5 inches. The tab includes a fingerprint reader and KNOX, a suite of secure applications for business users with the sharp feature of super-sharp and first time high-resolution screen colorful AMOLED display, the first of its kind on a tablet.

This tablet will be 0.2 inches thick . For comparison, the iPad Air has a 9.7 inch screen.

The tablet is becoming a popular personal viewing device for enjoying content, which makes the quality of the display a critical feature,” says JK Shin, chief executive and president of Samsung’s IT & mobile division, in a release. “With the launch of the Galaxy Tab S, Samsung is setting the industry bar higher for the entire mobile industry. It will provide consumers with a visual and entertainment experience that brings colors to life, beautifully packaged in a sleek and ultra-portable mobile device.”

Tom Mainelli, program vice president for devices and displays at IDC, elaborated that they are”causing many people to second-guess tablet purchases as the larger screens on these phones are often adequate for tasks once reserved for tablets.”

“Hardware is table stakes at this point,” Mr. Nguyen says. “It’s about services and applications.”

Galaxy Tab S has a plastic body. The Samsung Galaxy Tab S will come in a variety of connectivity options: Wi-Fi, or Wi-Fi and LTE, available in 16/32GB* + MicroSD (up to 128GB).

The Galaxy Tab S will be available in selected markets starting in July. The tablets can be preordered from a number of outlets, including Sears, Best Buy and Amazon, at a price of US$399 for the 8.4-inch and $499 for the 10.5-inch WiFi models.

Meanwhile AT&T has announced that it will be among the first carriers to offer the Galaxy Tab S in the US market.

Senior Vice president for the devices at AT&T, Mr Jeff Bradley said ”We are excited to bring the Samsung Galaxy Tab S to the nation’s most reliable 4G LTE network2,”

He also said, “AT&T offers the largest selection of Samsung devices and the Galaxy Tab S with access to 4G LTE will bring innovative new features and capabilities to Android device users. We are proud that AT&T will be among the first to offer this to consumers.”

However he has not announced any official statement regarding the release date of Galaxy Tab S through AT&T network. But this certainly is a good news for 4G customers on AT&T network who were looking to buy the Galaxy Tab S.