“Freedom Summer” a phrase which now has a romantic tint, painted with idealism, binded in glory: a noble moment of grandeur when blacks and whites from Mississippi assisted each other in the long drive for civil rights. 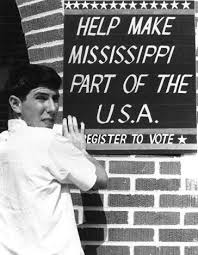 In 1964, civil rights activist Robert Parris Moses known as Bob Moses led the campaign to register black voters and educate black children in that state under the Mississippi Summer Project . The Ku Klux Klan, police and even state and local authorities carried out a systematic series of violent attacks; including arson, beatings, false arrest and the murder of at least three civil rights activists, New Yorkers Andrew Goodman and Michael Schwerner, and Mississippi native James Chaney who had vanished while investigating the burning of a black church.

Many of those activists started out in the small college town of Oxford, Ohio — by chance.

“They needed something just a little further north, so that the ties to the South were not quite so strong,” explains Ann Elizabeth Armstrong, theater professor at Western College for Women in Oxford, where the civil rights activists decided to go instead.

“Many in the Oxford community wondered why,” says Armstrong, who has created a historical walking tour about Oxford’s role in Freedom Summer. “Why would you interfere in what’s going on in the South?”

The events of Freedom Summer deepened the division between those in the civil rights movement who still believed in integration and nonviolence and others, especially young Afro-Americans, who now doubted whether racial equality was achievable by peaceful means.

David Kendall, an attorney who represented President Bill Clinton during his impeachment, was one of those volunteers gathered on the lawns of Western College in 1964.

“I think it was really, that summer, in large part a struggle about whose country it was,” Kendall says. “I thought, well, it sure as hell is not the segregationists’.”

Kendall’s roommate during orientation, Andrew Goodman, was killed that summer in Mississippi, along with James Chaney, an African-American Mississippi native, and Michael Schwerner, who, like Goodman, was from New York and Jewish.

Dorie Ann Ladner, born in Hattiesburg, who was drawn into the civil rights movement by the murder of Emmitt Till, expelled from Jackson State College for her activism and instrumental in Freedom Summer said,‘’This was a very important part of our history because blacks were being killed, segregation was at its highest peak, we could not get public utilities, we could not try on clothes in stores, our education was very poor,” she said in a conversation this spring. “We were not treated like human beings.”

Freedom Summer was a summertime moment for all.