Boston researchers have developed artificial pancreas which promises considerable change in the treatment of type 1 diabetes, a chronic condition in which the pancreas produces little or no insulin and these pancreas potentially enables 2 million Americans to eat what they want without counting carbohydrates or calculating insulin injections.

Type 1 diabetes usually starts in childhood or young adulthood. Investigators from Massachusetts General Hospital and Boston University developed an experimental device, which consists of an automated pump that releases the hormones insulin and glucagon and a glucose monitoring system controlled by an iPhone app. Insulin works in conjunction with glucagon, a hormone that raises blood sugar. Together, they keep blood sugar in a healthy range.

Kovatchev, who has been working on the artificial pancreas since 2007 along with fellow researchers from three countries first presented their observations on their attempt to make the “artificial pancreas” mobile at the American Diabetes Association’s annual scientific meeting in June and had their work published in the current edition of the journal Diabetes Care.

Kovatchev, whom the UVA Patent Foundation named inventor of the year for 2011 for his work on the JDRF Artificial Pancreas Project said in a statement, “The technology will have to improve to get there, which means ensuring a stable connection, longer battery life as well as advancements in the apps that control the system.” 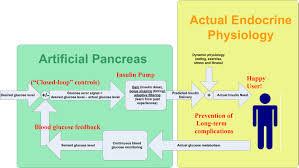 The Juvenile Diabetes Research Foundation, which funded the research along with the National Institutes of Health’s National Institute of Diabetes and Digestive and Kidney Diseases, defines the artificial pancreas as automated closed-loop control of blood glucose.

The researchers performed their trials with an experimental, proprietary wireless connection that required phones to be within 5 inches of the medical equipment. Kovatchev said this technology has been abandoned since because of Bluetooth low energy, which has a range of about 30 feet.

After the research was presented at ADA meeting, the team began trials on diabetic children at summer camp which is expected to be concluded this month according to Kovatchev. 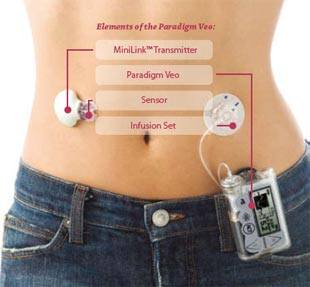 Currently about one-third of people with Type 1 diabetes rely on insulin pumps to regulate blood sugar. They eliminate the need for injections and can be programmed to mimic the natural release of insulin by dispensing small doses regularly. But these pumps do not automatically adjust to the patient’s variable insulin needs and they do not release glucagon.

The new device, described in a report in The New England Journal of Medicine, dispenses both hormones and it does so with little intervention from the patient. Diabetes experts who were not involved in the study cautioned that automated devices need far more vigorous testing to determine if they’ll be safe enough to become widespread.

Dr. Steven J. Russell, a lead author and an assistant professor of medicine at Massachusetts General Hospital said, “We need to do a true home-use study and much more work needs to be done before the device can be marketed.”