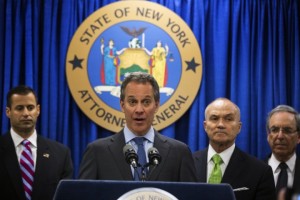 New York’s Attorney General, Eric Schneiderman, spoke out against the allegedly unsafe dark pool at Barclays, which exposed investors to the risk of predators. In his interview with CNBC, which he gave on Thursday, Schneiderman explained that dark pools are “places where large investors will go to protect themselves from high-frequency traders because there’s less disclosure” – at least in theory. The New York Attorney General went on to add that a lot of these major traders are, in fact, reading in the name of “average people on the street. They’re trading for pension funds”. This obviously makes the outstanding lawsuit against British bank Barclays all the more serious – an affair with potentially dramatic implications for many.

On Wednesday, the Attorney General’s office in New York announced it was filing a lawsuit against Barclays. The main accusation brought to the British financial institution is that it unfairly advantaged high-frequency traders based in the United States, in spite of its own claims of protecting major investors from this kind of practice. According to Barclays own statements, its dark pool was meant to conceal the activities of major investors from high-frequency traders. In fact, says the New York Attorney General, the bank did just that. The lawsuit is based on suspicions that the bank has been “providing huge informational advantages to high-frequency traders and deceiving ordinary investors about how safe the pool was,” said Schneiderman.

What’s more, the bank’s Equities Electronic Trading Division, the main department in charge with operating the so-called alternative trading system of the dark pool, is being accused with outright fraud. The same statement made by the New York Attorney General says that Barclays would deliver a very elaborate presentation, regarding the safety of their dark pool. The presentation promised them protection from “’toxic, predatory, aggressive traders’”, in the bank’s own words. “In fact, the whole system was a sham,” the New York official added.

In response, the British financial institution has said it takes these accusations very seriously. It is cooperating with the authorities, while also internally investigating the matter. The lawsuit filed against Barclays comes as yet another obstacle for its CEO, Antony Jenkins, who has been putting in serious efforts to restore its reputations. These fraud and unfair trading accusations are but the latest chapter in an ongoing saga of scandals. Barclays has been previously accused of tampering with the Libor benchmark interest rates. The bank has been under investigation for favoring high-speed traders for over a year and the recently published book Flash Boys, by Michael Lewis, has added a sense of urgency to it, over the course of the past few months.