You are here: Home / Technology / Apple to Release iPhone with Bigger Screen This Fall 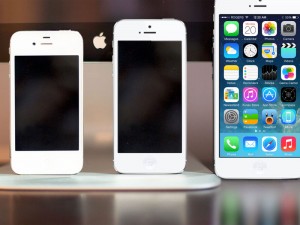 By all accounts, it looks like we’re definitely getting bigger iPhone screens this coming fall. Now, this piece of news begs the obvious question: “Are iPhone rumors anything to go by?” Given their abundance, not really – but when they come from trusted sources like Bloomberg, then the situation might be somewhat different. Bloomberg recently reported that Chinese suppliers of the world’s best-selling smartphone are about to take up working on two new iPhone models, with a lot more screen real estate than their predecessors. The report, also relayed by CNN and several other global news outlets, has the phones’ screens pegged at 4.7 and 5.5 inches across, respectively. In case you’ve forgotten, the current generations of iPhones, the 5C and 5S have screen diagonals of 4-inches across.

Make no mistake about it, this recently announced move is Apple’s clear attempt at keeping up with the competition. Its direct rival, Samsung, has recently come out with a massive ‘phablet’ (a portmanteau word denoting a device that’s both a telephone and a tablet), whose diagonal stands at a whopping 5.7 inches. The gadget in question, the Galaxy Note 3, is but one in a line of many other devices released by the Korean company whose diagonals rival those of Apple’s iPad – the Galaxy S5, Samsung’s flagship phone, measure 5.1 inches. And the other companies on this market segment aren’t wasting any time either: the HTC One M8 has a 5-inch diagonal, while the Amazon Fire, recently scheduled for release, stands at 4.7 inches across.

The bigger size is not the only noteworthy update that the iPhone will see this coming fall. According to the Bloomberg report, the coming phones will also be differently designed – with rounder corners and a thinner body. The same report says the devices are expected to ship out to retailers come September, in keeping with Apple’s already established tradition of releasing new phones early on in the autumn. It’s also interesting to note that, if the report checks through, 2014 will be the second year in a row that Apple releases not one, but two phone models at the same time.

In 2013, Apple broke its own unwritten rules and, in a move seemingly inspired by Samsung, came out both with a lower-end phone, as well as with its flagship device. The more affordable iPhone 5C, currently selling for as little as $99, came out in several colors, as Apple came around and gave into pressures from competitors. Rival phone producers had been releasing phones in various patterns, sizes, shapes, and price brackets at the same time for years. Yet for the six years prior, Apple had only been releasing one phone generation per year.