In what could be termed as the real blessing of science and technology for the mankind, a six-year-old disabled boy from Palestine was able to stand on his feet and walk for the first time in his life, thanks to surgery and rehabilitation at Lucile Packard Children’s Hospital.

Young Hadi Abukhadra, who is from the Tulkarem refugee camp in the West Bank of Palestine, was born with a disease called arthrogryposis. The disease led him to stuck joints and orthopedic deformities, i.e. his knees bent the wrong way and his feet faced upside down.

Hadi’s family had approached the Palestine Children’s Relief Fund (PCRF) seeking their help for his treatment. This has changed his life completely as he can now take his first steps and begin attending school. 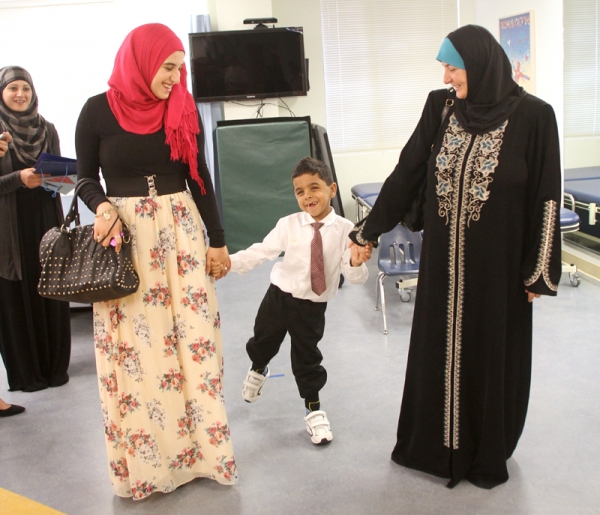 6-year-old Palestinian boy walks for first time, thanks to surgery at Lucile Packard

Hadi led a very tough life since his birth before undergoing under knife. His deformities left him with the only option of crawling or being carried. With his feet facing the wrong direction, standing created large abscesses on his ankles, and his knees hyperextended such that his lower leg could swing forward but not bend backward.

The life-changing surgeries took place in the United States. It was led by orthopedic surgeon Lawrence Rinsky of the Stanford School of Medicine.

PCRF, a nonprofit organization, took the complete responsibility of Hadi’s care — including surgery, rehabilitation and host stays. According to the doctors, Hadi’s case was a little different. The surgery of feet began with a series of casts meant to gradually stretch the skin, ligaments, nerves and other soft tissue. Hadi has also went to the hospital in February to undergo a small operation to lengthen Achilles tendon, followed by a larger operation a month later to remove the middle bone in his ankle.

Rinsky said, “His knees were also treated with a surgery and a series of casts “to slightly lengthen the muscles that straighten his knees, allowing slightly more bending and preventing hyperextension.”

“The first thing he said when they took off the cast was, ‘Thank God,’ and ‘thank you,’ and gave Dr. Rinsky a big hug, and he showed up in a suit wearing a plastic stethoscope because he wants to be Dr. Rinsky.”

It’s been a month now and Hadi has been walking on his own, no w withoutalker needed.