Parasitic fig wasp has a built-in power tool that helps them to pierce through woody fruits.

Indian scientists have found that ovipositor of the parasitic fig wasp Apocrypta westwoodi is equipped with a sharp zinc-coated tip that allows them to bore through the woody fruit.

The study conducted by Dr Namrata Gundiah and Lakshminath Kundanati of the Indian Institute of Science in Bangalore has found that Apocrypta westwoodi has immensely long (7–8 mm) and slender (15 μm) ovipositor that act as driller. The driller like appendage allows them to easily bore into the woody fruits.

With its help, the female parasitic fig wasp can easily pierce the tough skin of unripe figs to lay her eggs.

The scientists say the drill-bit-like appendage is thinner than a human hair and tipped with zinc. 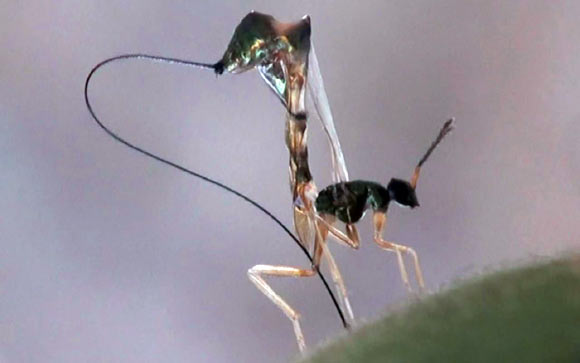 A parasitic wasp prepares to drill into a fig. Photograph by Lakshminath Kundanati

“If you look at this structure, it’s so beautiful in the sense that it’s hard but maneuverable, which is a tough challenge for a drilling tool,” Namrata Gundiah said.

The study researchers used scanning electron microscopy to magnify the tips of the insects’ ovipositors. They were amazed to see that the end of the ovipositor looked like a drill bit.

According to the scientists, other wasp species have been found to have similar adaptations. They studied the differences between the egg delivery systems of the boring parasitoid wasp Apocrypta westwoodi and the wasp that pollinates the fig’s flowers, Ceratosolen fusciceps.

“Our first question was what are the different adaptations that these two species undergo. When we looked along the length of the borer’s ovipositor we found the tiny pits in the shaft, roughly in the location where the structure bends as the female drives the tip into the fruit to allow the ovipositor to flex without breaking ,” said Gundiah.

Sensory structures at the tip were also seen. These structures help guide the ovipositor to the best locations for the wasp to lay her eggs.

The study was published on May 28 in the Journal of Experimental Biology.