In a positive development, the US job market was seen strengthening as the number of Americans filing new claims for unemployment benefits fell last week to its lowest level in seven years.

According to the Labor Department report, released on Thursday, the initial unemployment benefits applications in the United States dropped from 24,000 to 297,000 for the week that ended May 10.

This reading has brought unemployment claims back to their pre-recession level. During the Great Recession period in March 2009, the weekly applications jumped to 650,000. 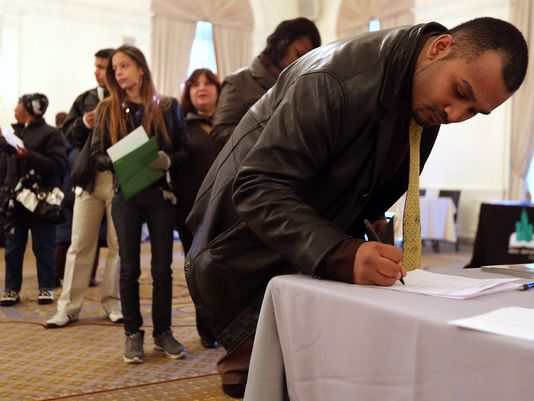 Market analysts say the current reading was registered at the lowest level since May 2007, which is a good sign for the US labor market.

It is noteworthy, the job market of the United States is making a comeback after wobbling in December and January due to an icy-cold winter.

With the decline in the unemployment benefit applications, hiring in the US job market has also picked up. The government report says most jobs were added in April. Job gains have averaged 214,000 in the first four months of this year, up from an average of 194,000 in 2013.

The report say nonfarm payrolls increased 288,000 in April this year. In such an outlook, the economists expect job gains to average 200,000 for the rest of the year.

The improving employment condition in the United States is going to tremendously help the country’s economy.

In the first three months of this year, the economy grew just 0.1 percent at an annual rate. Analysts say it is largely because of the cold weather conditions that kept consumers away from shopping malls and discouraged home and car sales.