In a most recent count of honeybee colonies a decline in deaths of the crucial pollinators has been observed as per the researchers report on Thursday.

The annual report put forward by the Bee Informed Partnership arouses the controversial topic i.e. colony collapse disorder. Colony collapse disorder (CCD) is the phenomenon in which the adult bees simply disappear from the colony hives. There are typically few, if any, dead bees found. CCD is killing growing number of bees and demands to take curative measures to ensure enough number of bees for pollination. 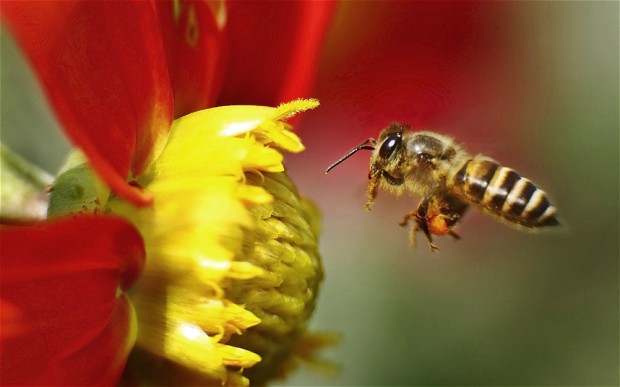 The fate of the bees is a huge issue because without bees it won’t be possible to pollinate many of our favorite fruits and vegetables also resulting in the United States loss of $15 billion worth of crops, ranging from almonds, and asparagus to zucchini.

Lisa Archer, director of the food and technology program for Friends of the Earth U.S said, “Bees are the canary in the coal mine for our food system.”

Scientists have found that a class of nerve-poisoning insecticides called neonicotinoids – whose usage was banned by European Union for two years – has progressively more deteriorated the predicament of bees. The researchers found that pesticides lead to impairment of honey bee neurological functions, specifically memory, cognition, or behavior.

Just last week, a trio of researchers published a study claiming a strong link between the pesticides and colony collapse in healthy hives.

However, the Bee Informed survey of more than 7,000 beekeepers concentrated on a different threat to the bees: parasitic Varroa mites.

“We think we could take a bite out of some of these losses if you control the mites properly,” Dennis vanEngelsdorp, an entomologist at the University of Maryland and the director of the Bee Informed Partnership, told.

The toll on the honeybees diverges widely every year: Over the past winter, beekeepers said they lost 23 percent of their bee colonies. That’s much better than the 31 percent loss recorded for the winter of 2012-2013, or the 29 percent average loss for the eight-year history of the survey.

This year comes as a jolt when asked about the colony losses during the summer for the first time as the figure was an unpredictably high 20 percent.

“We used to think that winter was the critical period,” vanEngelsdorp said in a news release. “But during our field studies, beekeepers told us they were also losing colonies in the summer months. So we expanded the survey and found that, in fact, colonies are dying all year round.”

So the question arises what is the need of the hour?

Eric Chivian, who is a beekeeper as well as the founder and former director of the Center for Health and the Global Environment at Harvard Medical School said, “Neonicotinoids are ‘our new DDT’ and should be banned from use until they have been demonstrated, independently and conclusively, to be safe for the environment and for human health.”

However adding a twist in the tale some of the researchers demanded for more rigorous studies to trace the causes of bee colony loss as the current study faced serious shortcomings — including the lack of replication at each location, small sample size, and the use of pesticide doses that were larger than bees would get under realistic field conditions. Also they said that exposure to small doses of neonicotinoids did not have any adverse effects on bees.

University of Illinois entomologist May Berenbaum said other options include using drone traps, because “the mites prefer drones”; or applying formic acid, a natural compound that kills mites.

The survey was carried by VanEngelsdorp along with his team of 11 researchers. A total of 7,183 beekeepers, who collectively manage about 22 percent of the country’s 2.6 million commercial honeybee colonies, participated. The majority of its funding was received from USDA.

The writer of the study appearing in the Bulletin of Insectology, “Sub-lethal Exposure to Neonicotinoids Impaired Honey Bees Winterization Before Proceeding to Colony Collapse Disorder,” was Chensheng (Alex) Lu of the Harvard School of Public Health and Kenneth Warchol and Richard Callahan of the Worcester County Beekeepers Association in Massachusetts.