Rekulapelli, who wants to attend Stanford University and become a surgeon, says, “I probably want to be the head of a department at a hospital, try to graduate at the top of my class, but I think, right now, this is probably the biggest accomplishment I’ll ever achieve in probably 20, 30 years.”

Rekulapelli, an eighth-grader, defeated nine other finalists by answering all three questions correctly in a one-on-one showdown. His youngest rival was 11-year-old Ameya Mujumdar of Tampa, Florida. 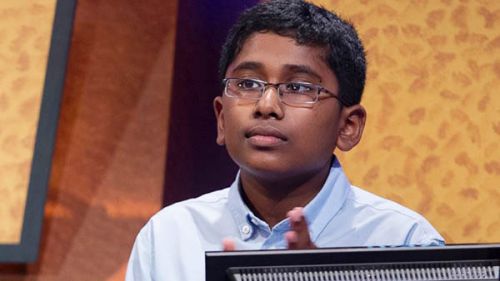 The question that brought success for Rekulapelli was: What African country is building a new capital called Oyala in the rain forest, 65 miles east of Bata? The answer: Equatorial Guinea.

The prize money has been doubled from last year following the donation from “Jeopardy!” host Alex Trebek, who stepped down a year ago as host of the bee. Broadcast journalist Soledad O’Brien hosted this year.

The finals will be broadcast on Thursday evening on National Geographic Channel and Nat Geo WILD.