You are here: Home / Health / 332 pounds Teena Henson loses 50 percent of her weight in three years

‘5-foot-4 and 332 pounds’ that’s how 54-year-old Teena Henson was known. The increase in weight was her biggest problem. But a newspaper ad changed her life completely. The ad was about a health club ‘Anytime Fitness’ that was opening in her hometown of Gilmer, Texas.

She calls this huge change in herself as a journey to life. Henson specifically wanted to join the health club at any cost as it offered services 24/7 to men and women of all levels of fitness.

“Then there was an ad in the local paper that Anytime Fitness was opening,” she said while adding, “It was like, ‘Here it is; it’s in your hands. Now, what are you going to do with it?’ “

Without losing time, she enrolled at the gym while it was still under construction. 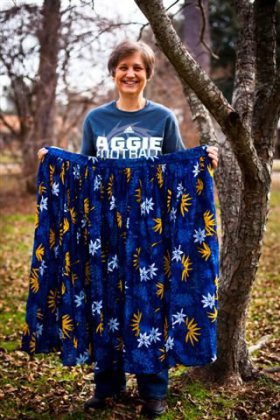 In March 2011, before joining the gym, Henson was 5-foot-4 and 332 pounds when she tried dieting to shed extra kilos. She was not suffering any health issues related to obesity but her parents and three brothers were all diabetic so she knew the potential consequences.

Her family, mainly her late mother Mama Henson, encouraged her to lose weight.

“I think the older I got, the more concerned my mom became because she knew she wouldn’t be there to take care of me,” Henson said, while adding, “She was my No. 1 supporter on my plan to exercise and lose weight.”

Soon she started realizing that ‘diet’ was a four-letter word for failure” and it was not going to help her in any way.

She worked out for half an hour to an hour at Anytime Ftness.

During her days at Anytime Fitness, she realized that bringing changes in lifestyle is only to help her.

Henson says, “The smallest of changes one can make in their present lifestyle can garner big changes. Not only in the physical body, but in the mind.”

She started with changing her eating habits. At first, she slashed her soft drinks intake, which helped her losing 18 pounds in less than a month.

The next step was making healthier food choices. She continued to eat at fast food restaurants because it was convenient.

By December 2011, Henson lost 64 pounds and became healthier than ever. Almost two months before her mother died in August 2012, Henson had lost 100 pounds.

Last year, Henson made significant changes to her diet. She started eating products like quinoa, whole wheat bread and fresh vegetables. She aims to eat 1,200 calories a day.

In less than three years, Henson has lost 166 pounds or 50% of her body weight.