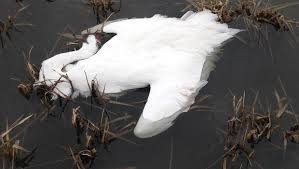 Louisiana Department of Wildlife and Fisheries Enforcement Division agents said that someone shot a pair of whooping cranes in Jefferson Davis Parish in southwest Louisiana, killing the female and critically injuring the male on Thursday morning.

The whooping cranes were found and recovered near the corner of Compton Road and Radio Tower Road just north of Roanoke about five miles north of Interstate 10.

LDWF spokesman Adam Einck says the male is from the first group of whooping cranes released in Louisiana in 2011, and the female was from a second group.

Overall 50 cranes were banded, tagged with radio transmitters and released in an effort to create a flock like those that once lived in southwest Louisiana. Thirty-two are still alive.

They were the only birds that had formed a mating bond last year, though they were too young to produce eggs, said Robert Love of the Louisiana Department of Wildlife and Fisheries.

Whooping cranes are among the world’s largest and rarest birds, with only about 600 living today.

The injured male crane was being taken about 100 miles to the Louisiana State University veterinary school in Baton Rouge. It was expected to arrive Saturday morning, veterinary school spokeswoman Ginger Guttner said.

It is expected to live but wildlife agents don’t know if it will be able to fly, Einck said. “One of its wings was pretty badly damaged from the shot,” he said.

“Anytime we lose one of these cranes it sets us back in our efforts to restore the whooping crane population back to its historic levels in Louisiana,” said LDWF Secretary Robert Barham. “These were once native birds to Louisiana and the department would like to see these cranes thrive again in the future with a sustainable population.”

To report any information regarding this whooping crane shooting, LDWF has requested the public to please call 1-800-442-2511. LDWF’s Operation Game Thief program is offering up to a $1,000 reward leading to whoever shot the birds that directs to an arrest.