You are here: Home / National News / School held early graduation ceremony in the living room for teen with cancer

“I cannot think of anything worse, I mean it’s your child and nobody wants to lose their child,” said Mariah Evans.

He is fighting with his second life battle with cancer.

“It’s hard to hear that your child has cancer the first time, but it’s horrific to hear it the second time,” Evans said. 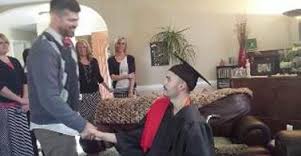 Evans was informed in January that her son did not have much time to live. He is now receiving hospital care at his home, making it unfeasible for him to go to school to complete his high school education.

His teacher Peter Vanderlinden, at Vista Education Campus in Farmington found out, they discovered a new approach.

“He needed to be rewarded for his efforts because he was such a good student,” Vanderlinden said.

They held a small graduation ceremony in Person’s living room to celebrate his achievements.

“He earned it all, we didn’t do this certificate of completion to help him or make him feel good,” Vanderlinden said. “He earned it, and we wanted to reward the efforts that he did.”

It was a dream come true for Person and a memorable moment for his mother.

“It’s really important to me,” Riley said. “It’s one of the most special days I’ve had. It’s something I’ll always remember.”

Every mom wants to see their kid graduate, every mom. It’s a big deal,” Evans said.

It is not known how long Person has to live, but he plans to make each day special.

“Just make every day count and do whatever I can before I basically go,” Riley said.