You are here: Home / National News / Salt Lake libraries to participate in Food for Fines program 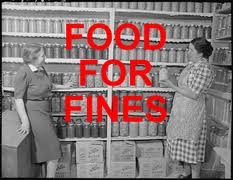 SALT LAKE CITY — The Salt Lake City Public Library System and the Utah Food Bank have joined hands for the annual Food for Fines program. The program includes deduction of $1from patron’s overdue library fines in return of per non-perishable food item donated.

Those having library fees may donate as much amount of food they want without any limitations to the amount of money subtracted from their fees.

“This is the way we can give back to the people who support us,” said John Spears, executive director of the Salt Lake City Public Library system.

All the six city library locations are taking part in the Food for Fines program.

Many branches called during the first few days of the program because the barrels had been filled, said Andrew Shaw, spokesman for the library system.

Five out of seven barrels have been filled already by the fourth day of the program.

Shaw hopes to double the nearly 6,500 pounds of donated food items as received in 2012.

The checkout rules for the city library were also changed recently. As of Jan. 21, the loan period for most items — books, audio books and CDs have been changed to three weeks from four. DVDs, magazines and other specially-marked items can be checked out for seven days.

“This is a chance for people to clear up their records,” Spears said. “It’s a way for us to recognize the adjustments that people are making as we change to our new loan period. It’s an easy way for people to give back to the community while also helping clear their record at the library.”

“We wanted to try to time it so that we could really make a difference in the lives of the people in the valley,” he said. “We are supported by the public and we’re here for the public and it’s rare that we can do something other than our normal services to give back to the community.”