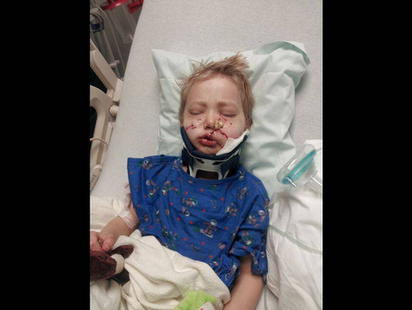 SALT LAKE CITY — After an attack by a neighbor’s pit bull Wednesday evening, a 6-year-old boy was hospitalized.

Wyatt Abraham was playing soccer in a neighbor’s yard and the dog cracked its chain. April Hancock, Wyatt’s mother said, “I was watching out a window, seeing him playing.”

The dog’s owner brawl the animal off, but as Wyatt began to run he released it, and the dog attacked again, Hancock said.

Wyatt suffered several bites on his face. He necessitated hours of reconstructive surgery. Another surgery is planned by the doctors for treating the deep puncture wounds to his arm.

“I figured, ‘The owner’s outside. He’ll be OK,'” Hancock said. “His whole lip was torn off. You could see his gums and his teeth, and it was in pieces. His cheek was hanging off. He was missing a little piece of his arm.”

Wyatt is also wearing a neck brace in a probable case of fracture, Hancock said.

Wyatt’s has been planned to be kept at the Primary Children’s Hospital for at least two weeks. He will be treated with required speech therapy.

The owner voluntarily surrendered the dog when officers from Salt Lake County Animal Services arrived to the home near 500 South and 1000 West.

The dog has no recorded attack history.

Hancock said she was there in the neighborhood from the last month only, and she commonly brings her son inside when the dog is out. She said she fears the owner has tried to sic the dog on her family.

“We were moving our stuff in and he was saying, ‘Oh, get ’em. Get ’em. Oh, good boy,'” Hancock said. “We got in a fight over him trying to sic his dog on our dog because we have pit bulls as well.”