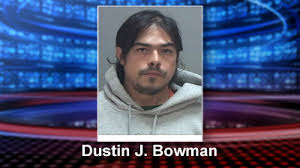 Authorities on Friday arrested an electrician who is supposed to ignite the fire in Salt Lake City on Feb. 9 in a building. The massive fire was visible for miles.

Dustin Jay Bowman, 33, of Bountiful was booked into the Salt Lake County jail on Friday night.

Bowman “stated that he did deliberately begin a fire in the construction” on Feb. 9, a jail report states.

On his Facebook page, he mentions his occupation as an electrician and posted three photos tagged “downtown fire aftermath” the day after the blaze and included a link to a news story about it.

“I guess I’m not going to work,” Bowman wrote the morning after the blaze, adding that he “can’t really afford a day off.”

Salt Lake County jail booking documents say that Bowman stated he intentionally caused the fire. Formal charges have not been filed in the arson.

Bowman is being held on suspicion of arson as well as two misdemeanor warrants from the South Salt Lake Justice Court. The jail’s website indicates Bowman has not been issued a bail amount.

No official charges have been filed against Bowman.

The announcement of arrest was made in a news release Saturday afternoon by the U.S. Department of Justice Bureau of Alcohol, Tobacco, Firearms and Explosives. The bureau’s Denver office spokesman refused to share further details.

“We’re not finished with the on-scene investigation,” Brad Beyersdorf said Saturday. “Due to the ongoing investigation and continuing judicial process, no further information can be released at this time.”

The under construction building at 540 E. 500 South, which would have been a 64,000-square-foot apartment building, went up in flames. It also led to the closure of 500 South between 500 East and 600 East for the better part of the precedent week.

No worker was present on site that day, and there was no power connection to the building.

“We’ve been working all week with [the investigators], who have done an exceptional job of being thorough and analyzing every possible detail about what could have created the fire,” said Dan Bridenstine, owner of U.S. Development, the general contractor for the project.

The Salt Lake City police do not foresee the road reopening until at least Tuesday.

Bowman has past felony and misconduct convictions for drug offenses.