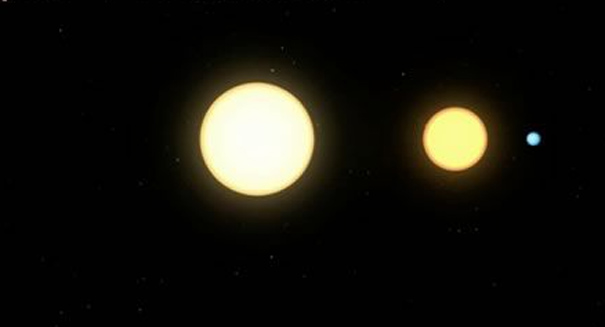 Researchers at the University of Bristol claim that they have studied into real world counterparts i.e. Kepler-34(AB) b, of the fictional Star Wars planet Tatooine.

Kepler-34(AB) b, a Saturn-sized gas giant discovered in 2012 by NASA’s Kepler mission, is a circumbinary planet. Circumbinary planets are those planets that orbit two stars. They have been a topic of much scientific conjecture as well as the theme of many science fiction movies and writing.

Using Kepler space telescope, they discovered the reason responsible for the formation of Kepler-34(AB).

In the real world, Kepler-34b type circumbinary planets are surrounded with indescribably harsh circumstances. Powerful gravitational perturbations from the two stars on the rocky building blocks of planets results in disparaging collisions that grind down the material.

Dr. Zoe Leinhardt, computational astrophysicist at Bristol’s School of Physics, says, “Our simulations show that the circumbinary disk is a hostile environment even for large, gravitationally strong objects. Taking into account data on collisions as well as the physical growth rate of planets, we found that Kepler 34(AB) b would have struggled to grow where we find it now.”

Leinhardt and her colleagues wanted to know the survival technique of such planets in such a severe environment. They accomplished the operation by using sophisticated computer simulations to model how planets form in binary star systems, and then migrate into orbit.

The team of researchers says their use of planetesimal disk self-gravity and extensive collision models is a big enhancement over previous studies.

“Circumbinary planets have captured the imagination of many science-fiction writers and film-makers – our research shows just how remarkable such planets are. Understanding more about where they form will assist future exoplanet discovery missions in the hunt for earth-like planets in binary star systems,” said lead author of the study Stefan Lines.