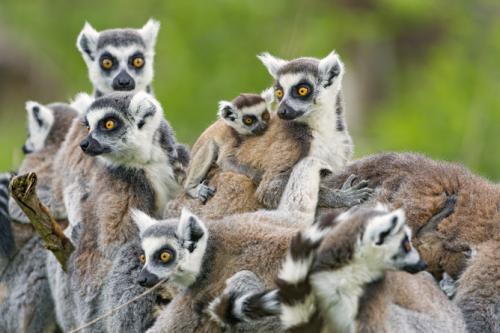 The real status of the lemurs on the Madagascar Island – the only place on earth that they exist – is a very wobbly one. 94% of lemur species are under threat; an international team of researchers have joined forces to protect critically endangered lemur population.

Lemurs, all 101 species of them, are only prevalent to Madagascar. They represent 20 percent of the world’s primates. The report was published in the journal Science.

“This combination of diversity and uniqueness is unmatched by any other country-remarkable considering that Madagascar is only 1.3 to 2.9 percent the size of the Neotropics, Africa, or Asia, the other three landmasses where non-human primates occur,” the scientists write in the abstract to their research.

The projected $7.6 million project “combines tourism with increased conservation efforts.”
Madagascar’s political problems,increased banditry, illegal logging for rosewood and ebony trees in national parks and nature reserves, and a sharp increase in the hunting of lemurs as “bush meat” has left them facing extinction.

According to Dr. Christoph Schwitzer head of research at Bristol Zoo Gardens and vice-chair for Madagascar of the International Union for Conservation of Nature (IUCN) SSC Primate Specialist Group, tourists are still approaching Madagascar even in the face of political instability.

“There’s always a trade-off between the destruction caused by too many tourists and the money they bring to the country that can be used for wildlife conservation,” Schwitzer said.

If implemented carefully, and as a part of a broader conservation plan, can be one tool among many to deal with conservation concern.

Western University primatologist Ian Colquhoun, in conglomerate with 18 lemur conservationists and researchers who are from Madagascar or have worked there for decades, are working on an action plan to save the lemurs from extinction.

“Through seed dispersal and attracting income through ecotourism, lemurs have important ecological and economic roles for Madagascar,” Colquhoun said. “I think there is huge potential for Malagasy all over the island to take pride in their lemurs.”