NASA’s newest lunar probe, Lunar Atmosphere and Dust Environment Explorer (LADEE) was launched in September. Last week for the first time LADEE has beamed the view of lunar surface back to earth.

LADEE provided new moon photos. The images show stars and pockmarked lunar and were released by NASA on February, 13 to ground controllers on the earth. 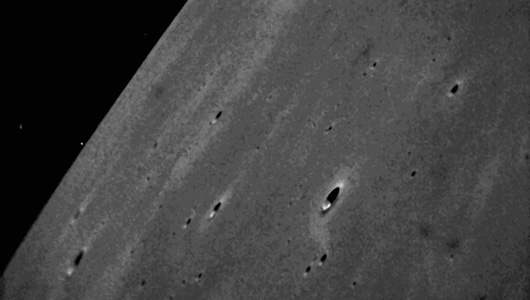 “Star tracker cameras are actually not very good at taking ordinary images,” Butler Hine LADEE project manager said in a statement. “But they can sometimes provide exciting glimpses of the lunar terrain

The first is the crater Krieger with the crater Toscanelli, in the foreground. The second image sent showed another crater called Wallaston P close the horizon and part of the moon mountain Mons Herodotus, according to NASA. Image third captured the lunar mountain range, Montes Agricola. Image four captured Golgi, about 4 miles in diameter, and 3-mile-wide Zinner. The fifth image shows craters Lichtenberg A and Schiaparelli E in the smooth mare basalt plains of Western Oceanus Procellarum, west of the Aristarchus plateau.

The specific goal is for scientists to reveal information about an odd glow on the moon’s horizon before sunrise. The scientists believe that the glow is caused by electrically charged dust in the moon’s exosphere. Scientists are trying to solve this mystery since Apollo moon missions and before. LADEE’s instrumentation seeks to investigate if the dust causes the glow.

“Image four in the series captures Golgi, about four miles (6 km) in diameter, and three-mile-wide (5 km) Zinner,” NASA officials said in an announcement.

Scientists are trying to solve an anonymity dating back to the Apollo moon missions and even before. Astronauts marked a strange shine on the moon’s horizon before sunrise, and scientists believes that it could have been caused by electrically charged dust in the moon’s thin atmosphere

Originally, this spacecraft was set to conduct only 100 days of Science; however, NASA officials found that the 280 million probe still has enough fuel to collect data for another 28 days. LADEE will most probably on April 21 crash into the moon’s surface, putting its mission to an end.