NASA’s Interface Region Imaging Spectrograph, or IRIS, witnessed the strongest solar flare on Jan. 28 at about 2:40 p.m. EST since its launch in the summer of 2013, according to the space agency.

According to scientists solar flares are “bursts of x-rays and light that stream out into space.” However, scientists are unsure about the details of what actually leads to the phenomenon.

NASA news release reported IRIS provides an inside look into the Sun; it peers into the layer below the surface, called the “chromosphere.” 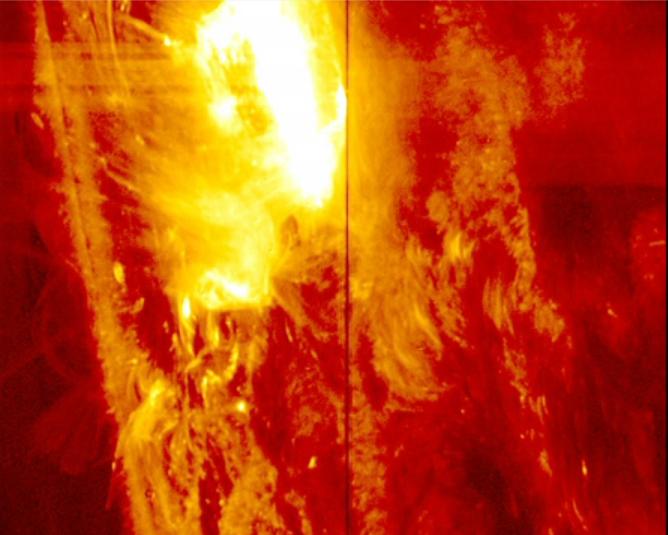 IRIS is not capable of viewing the entire surface of the sun at once. Due to this limitation the research team has to make decisions about what region might provide valuable observations and at what time.

A magnetically active region on the sun was noticed by the researchers using IRIS. IRIS was focused on it in order to see how the solar material behaved under intense magnetic forces.

Scientists observed a moderate flare, tagged an M-class flare, the second-strongest class flares after X-class — erupted from the area, sending light and X-rays into space.

“IRIS is equipped with an instrument called a spectrograph that can separate out the light it sees into its individual wavelengths, which in turn correlates to material at different temperatures, velocities and densities,” NASA said in a statement.

“The spectrograph on IRIS was pointed right into the heart of this flare when it reached its peak, and so the data obtained can help determine how different temperatures of material flow, giving scientists more insight into how flares work,” the news release reported.

The mission is managed by Lockheed Martin Solar and Astrophysics, while NASA’s Ames Research Center is in charge of missions operations and ground data. The Pleiades supercomputer housed at Ames was used to carry out many of the numerical simulations that are led by the University of Oslo.