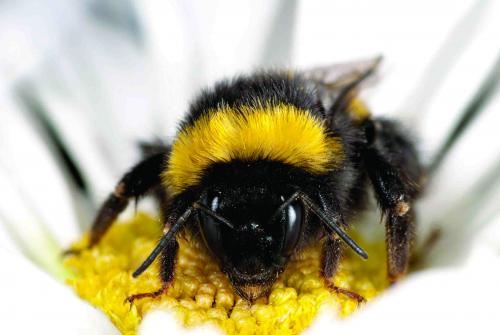 A new study finds that diseases that are common in managed honeybee colonies could be infecting their UK’s wild bumblebee cousins, according to a research.

Insects infected with deformed wing virus and a fungal parasite called Nosema ceranae were found across England, Scotland and Wales.

The team suggests the beekeepers to keep their honeybees as free from disease as possible to stop the spread.

“These pathogens are capable of infecting adult bumblebees and they seem to have quite significant impacts,” said Professor Mark Brown from Royal Holloway, University of London.

In the last few decades, many species have suffered sheer declines, and some, such as Cullem’s bumblebee (Bombus cullumanus) in the UK, are wiped out.

According to the scientists the demolition of their habitats predominantly wildflower meadows – has determined much of this loss, but the latest research propose that disease also could play a role.

Dr Matthias Fürst of Royal Holloway, University of London along with Professor Brown worked in collaboration with Dr Dino McMahon and Professor Robert Paxton at Queen’s University Belfast, and Professor Juliet Osborne working at Rothamsted Research and the University of Exeter. They said the research endow with crucial information for beekeepers across the world to make certain honeybee management supports wild bee populations.

They trailed the geographical dominance in the UK of a non-native parasite called deformed wing virus (DWV) that is often found in both honeybees and bumblebees. The virus is spread by a mite and typically kills bees within 48 hours. The pattern of spread showed that imported honeybees are the major source of infection for the wild pollinators, and that emerging diseases spread by those colonies could be a major cause of mortality in the wild.

World trade in honeybee colonies supplies honey production and also plays a very important role in agriculture – in some cases there would be no crop without the pollinators.

Honeybees and bumblebees belong to the same bee family. The smaller honeybees reside in managed hives, which beekeepers move from farm to farm to pollinate crops and produce honey. Bumblebees are residents of much smaller colonies in the wild. Both get pollen from the same flowers and crops, which is how they come into contact.

“This is a previously unrecognised threat,” says Fürst. While his study looked mainly at how diseases move from honeybees to bumblebees, he warned that the problem “may well play a particularly significant role for already rare and vulnerable pollinator species”. The UK alone is home to around 250 different species of wild solitary bees.

Though recent studies have provided subjective reports of the occurrence of honeybee parasites in other pollinators, this is the first study to determine the epidemiology of these parasites across the landscape.

Professor Brown added: “National societies and agencies, both in the UK and globally, currently manage so-called honeybee diseases on the basis that they are a threat only to honeybees. While they are doing great work, our research shows the picture is much more multifaceted.

Brown said that the sample infection numbers are conventional, so overall infection rates are more, highlighting the critical requirement for more work to protect the bees, which pollinate three-quarters of the world’s food crops, contributing some $200 billion to the global economy.

The study was published in a recent paper in the Proceedings of the National Academy of Sciences journal.