You are here: Home / Technology / LG Reduces Price of its Curved OLED TV By Almost Half in the US

LG had launched an innovative set in the television category of products just a year back. The set sporting the model number 55EA9800 had been launched with a price tag of $14,999. The uniqueness of the set is its 55 inch curved display panel based on OLED technology. The same set had been launched in Britain for £7,999.

However, just six months down the line and the price of the set has been halved. In the US the set is now available for $7999 while that in the UK for £4,999. The US dealers are also giving a rebate of $1000 in addition to the price reduction at the sale point, sweetening the deal even further.

There could be many reasons for such a price cut, and that too so early in the set’s life time. In the official words of LG however, the main reasons are two. One being the advent, and imminent one at that, of the 4K television sets and standards. These previous generation TV sets would naturally become redundant. So the sharp reduction in price can be seen as a stock clearance process which has been initiated. The second reason which LG claims to be more authentic is the necessity to bring price into the reach of the mass. With more volume trade, they expect to make better profit. 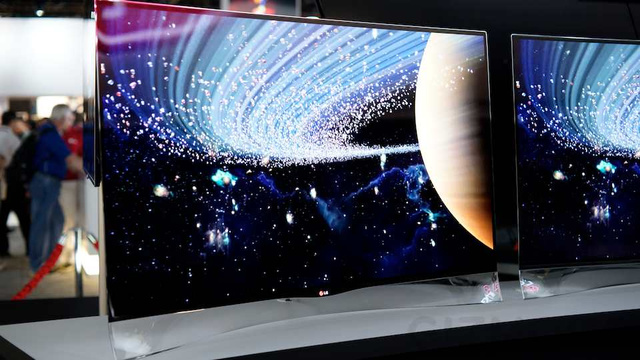 This second aspect was also mentioned by William Cho, the president of LG Electronics in the US when he mentioned about making the OLED TV sets more affordable so that more people could buy them. The life time of the set has been slated to be middle of next year in the words of LG themselves and therefore even at half the price would the set yet be worth it or not is a question to be taken on before deciding to buy the set.

The issue of a curved display also needs to be studied as it does not have much value additions so far as viewing experience goes.