You are here: Home / Tech & Science / Is Nuclear Fusion necessary for Power Generation? 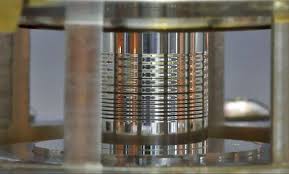 There is a major leap in the science of nuclear fusion. The National Ignition Facility (NIF) at the U.S. Department of Energy Lawrence Livermore National Laboratory in California fused a small amount of deuterium and tritium (two isotopes of hydrogen in a hohlraum target super-cooled to minus 426°F) with lasers fed with 500 mega joules (mJ) of electricity over a hundred millionth of a second, about the entire electrical output of America over that short time period. The target then gave out more energy output than it absorbed.

A key step on the way to ignition [of nuclear fusion] is to have the energy generated in an inertial-confined fusion plasma exceed the amount of energy deposited into the deuterium–tritium fusion fuel and hotspot during the implosion process, resulting in a fuel gain greater than unity.

NIF achieved this using a manipulation of the laser pulse shape in a way that reduces instability in the implosion. These experiments show an order of magnitude improvement in yield performance over past deuterium–tritium implosion experiments. We also see a significant contribution to the yield from α-particle self-heating and evidence for the ‘bootstrapping’ required to accelerate the deuterium–tritium fusion burn to eventually ‘run away’ and ignite.

“There is more work to do and physics problems that need to be addressed before we get to the end,” said Omar Hurricane, lead author of the study. “But our team is working to address all the challenges, and that’s what a scientific team thrives on.”

This is kind of a great victory for science, but still it hardly fulfill the revolution of a Green Energy future envisioned by us all past the destruction caused by the hydrogen bomb generated by fusion reaction. But it is really appreciable that we may have an edge on the energy gain subject and that we could eventually generate power through fusion.

We don’t need fusion for general energy on Earth. Yes, the waste issue is different than for our traditional commercial reactors, you don’t produce actinide elements and fission products with fusion, and the activated core of the fusion reactor remains radioactive for only a hundred years or so.  By the same token, the amount of spent fuel we have from our reactors now is not very much either and, if marked in the new generation fast reactors, is only radioactive for 200 years or so.

The NIF was established by the fusion-bomb weapons people and the impression to use inertial internment fusion as a source of energy was an excellent way to endow this micro-fusion-bomb testing gadget.

The exchange of heat between the media used to contain the energy from the decelerating protons, neutrons and gamma rays is going to be hard, too. The chamber has to be transparent so as to not absorb the laser ignition energy as the pulses go through the medium.  But loads of matter is needed to absorb the energy when the hohlraum targets kindle.  It weakens the gamma rays that hit the walls of the chamber because that energy is just lost.

Success can’t be achieved from both ends – empty to transmit the laser, but full to absorb photons from the explosion.

Essentially the most primary importance of fusion is , “A fusion power plant would produce no greenhouse gas or other noxious emissions, operate continuously to meet demand, and would not require geological disposal of radioactive waste. A fusion power plant would also present no danger of a meltdown and provide virtually unlimited safe and environmentally benign energy”. This gives fusion reaction an edge over all the pros and cons of related environmental hazards.