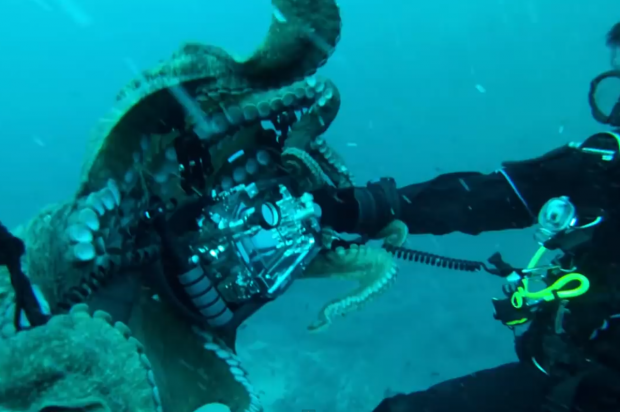 Earlier this month, two scuba divers in Bluefish Cove in Carmel, California encountered wrestling with a huge octopus that attacked them and tried pilfering their camera.

The divers, David Malvestuto, 34 and Warren Murray, 56 told that chances are there that the creature may encountered the sight of its own reflection and mistaken it as another octopus.

They both were recording footage of the creature in the Bluefish Cove, when it seized the device, flickering an underwater wrestle.

When the octopus attacked the pair, the pair was 80ft below sea level capturing pictures of marine life.

The octopus measured about 8 feet in length.

Murray, who filmed the incident,said: “Before you know it, I saw one arm grab him and then the whole body just lunged onto his camera.

“I was worried that the octopus wasn’t actually going to come off his camera and I was just making sure I got it on video, otherwise the people on land wouldn’t believe us.”

“We didn’t bother it or put it in a dangerous situation”, Mr Murry said, “so I think it more or less was just curious”.

Both divers came out secure during the encounter suffering no injuries, and were lucky enough, bearing in mind the fact that all octopuses are poisonous as well.

In a similar case in the year 2010, an octopus tried to steal diver Victor Huang’s new Panasonic Lumix camera, whose outcome was a five minute chase as Huang chased the creature in an endeavor to get his gadget back.