The researchers have brought to us one the most interesting war coming from ages and i.e. the ant war.

Crazy ants and fire ants, the two species of ant, have been known for their fierce battle for centuries and this time the researchers at the University of Texas have revealed their interesting war technique.

Recently, the researchers spotted both kinds of ants in their invasive mode in a new battleground—the United States—engaged in a tricky chemical warfare, where crazy ants were seen at an advantage over their arch rival. 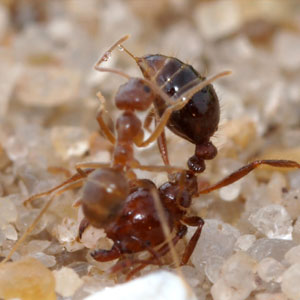 Fire ants have potent venom that they use to kill most ants that come into contact with them during war. The new research has found that the venom is ineffective when it comes to crazy ants. Researchers say these ant species secrete a substance, which is antidote in nature, when they get stung. During the battle when fire ants try to take over crazy ants by releasing their venom, the latter secrete a substance and rub it all over themselves to neutralize the venom, new research finds.

The study was published online on February 13 in the journal Science.

While watching the fierce battle between the two ant species, the researchers’ team noticed that after crazy ants were exposed to the venom, they would stand on their hind and middle legs and curl their abdomens which are covered in glands that secrete formic acid to release the antidote all over their bodies.

Taking leads from this interesting episode, researchers decided to study how the detoxing substance worked. For the study, the researchers sealed off the crazy ants’ glands with nail polish and then placed them in a container with fire ants. What they saw was a fierce battle between the two ant species. The crazy ants with their glands unsealed only managed to survive the battle and almost half of them died after being dabbed with venom by the fire ants.

The researchers have still to study on how these formic acids help crazy ants to survive the venom released by fire ants. They believe the acid may be protecting them by destroying venom proteins and preventing them from penetrating the ant’s exoskeleton.