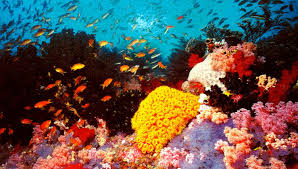 The Australian authorities approved the plan to dump 3 million cubic meters of dredge sediment in the Great Barrier Reef Park as part of a project to build one of the world’s biggest coal ports.

In a statement, GBRMPA said, “After rigorous assessment, it has approved an application by North Queensland Bulk Ports Corporation to dispose of dredge spoil at a deep-water location offshore of Abbot Point, subject to environmental conditions.”

The Great Barrier Reef is a collection of more than 2,800 separate reef sections, stretching for some 1,250 miles (2,000 kilometers) off northeast Australia’s Queensland coast and housing a staggering diversity of marine life.

The Great Barrier Reef was chosen a World Heritage Site by UNESCO in 1981.

The proposal, while conflict-ridden and disagreed by environmental groups including Greenpeace, had already been approved by Federal Environment Minister Greg Hunt last month.

Hunt has undertaken that “some of the strictest conditions in Australian history” will be in place to protect the reef from damage, together with water quality measures and upholds for the reef’s plants and thousands of species of coral, fish, molluscs, jellyfish, sharks and whales.

“We’re going backwards on the reef—that’s the sad truth,” says Australia Reef Campaign for international conservation group WWF, Director Richard Leck. “Exactly the wrong thing that you want to do when an ecosystem is suffering is introduce another major threat to it — and that’s what the marine park authority has allowed to happen today.”

Australia is a land of vast mineral deposits and a mining boom fueled by demand from China kept Australia’s economy strong during the global financial crisis. As the demand from China has diminished; Prime Minister Tony Abbott and his conservative government have given a word to focus their efforts on stimulating the industry.

“As a deepwater port that has been in operation for nearly 30 years, Abbot Point is better placed than other ports along the Great Barrier Reef coastline to undertake expansion as the capital and maintenance dredging required will be significantly less than what would be required in other areas,” said Dr Russell Reichelt, Authority Chairman.

“It’s important to note the seafloor of the approved disposal area consists of sand, silt and clay and does not contain coral reefs or seagrass beds.”

Bruce Elliot, general manager for the marine authority’s biodiversity, conservation and sustainable use division echoes the statement, saying that the environmental safeguards -47 in total -insisted upon by the Authority would protect the reef and seagrasses, along with the social and heritage uses of the marine park.

He also said that stringent settings would be placed on the sediment disposal, which will include a water quality monitoring plan that will linger in place five years after the dumping is done.

Infuriated conservationists say the reef is already at risk and will be fatally in jeopardy by the dredging, which will crop up over a 184-hectare (455-acre) area. Apart from the vulnerability that the sediment will asphyxiate coral and seagrass, the augmented shipping traffic will increase the risk of accidents, such as oil spills and collisions with fragile coral beds.

“This go-ahead for dumping is one more body blow for the Reef which further threatens marine life, its World Heritage status and Australia’s tourism and fishing industries,” Greenpeace Reef Campaigner Louise Matthiesson said on the group’s website.

“Green lighting the reef’s destruction makes a mockery of the Authority’s charter which obliges it to protect the Great Barrier Reef Marine Park and the World Heritage Area.”